Last Saturday I attended the Comiket at the British Library. It was fun – a novel venue and a nice atmosphere. So-so takings, but I made enough profit for some beers afterwards.

It was also my last comic convention as a seller for a while. I’m going to a couple more events this year, but I’ll be taking part in children’s activities and workshops, so won’t have a selling table. I’ve decided to take 2015 off from conventions (as an exhibitor at least) and enjoy being a comics consumer instead.

The thought of leaving exhibiting behind (at least temporarily) has caused me to reflect on my personal experiences since my first convention in 2008 (the much missed Web & Minicomix Thing). There weren’t many events then – I think Bristol, Caption and the Thing were the only regulars. In the years since, the list of comics events and conventions has expanded dramatically. It’s brilliant that there’s so much enthusiasm for comics and so much choice.

However, the quality has been very variable. Comics people are used to being treated as the lowest of the low and will put up with a lot, especially if it means they meet friends and like-minded others and have the opportunity for a good time. But exhibiting costs money, so we have had to become choosy about which events we attend. Word gets around fast and ‘bad’ conventions are quickly written off whilst the ‘good’ expand (which creates a whole range of other issues).

I don’t under-estimate how hard it is to organise a comic convention and how much work goes into it. It must be an enormous, tedious job filled with horrible people management-type stuff. There are so many places where it can go wrong. I helped out at Caption for a couple of years, a tiny, unique event held in a community hall. But getting the committee together in the same place at the same time just to talk about organising it was enough of a logistical problem, never mind the actual convention weekend itself. So I wouldn’t want anyone to consider the following to be a list of DEMANDS or expectations or a rant against any event in particular. This is a wishlist for ‘Ideal Con’, from an exhibitor’s perspective. This will have been made a year in advance if possible. LOCATION, DATE, TIME, a website address, a mailing list to join, a Twitter account and a Facebook page to follow/like. LOCATION, DATE, TIME, the three essential bits of information, are everywhere, the organiser’s email signature, twitter profile. EVERYWHERE. The organiser will still be asked this a million times but at least no one has an excuse not to know.

This is probably the first thing anyone sees once the announcement has been made. It will have LOCATION, DATE, TIME right at the top, in the banner or right next to it.

‘Comic Convention’ means different things to different people these days, so a paragraph defining the scope of the event is helpful: celebrity signings or hands-on workshops or kid’s events or panels or all the above. Ideally a comic convention should actually have comics in there somewhere.

There will be a whole page devoted entirely to HOW TO GET THERE. It will have a map, showing where the nearest public transport and car parks are. It will mention any planned engineering works for the day of the event. Additional directions are always good. It will show where the nearest food places and cashpoints are. It will show where any sponsoring shops/additional venues are (see below). If the venue has multiple entrances it will show which one exhibitors/visitors are supposed to use or where the information point will be (see below).

There will be link to a printable PDF of all the information on this page. People still like to print stuff.

There will be a separate page for exhibitors: it will have set up times and start/close times. A table plan at least three months before the event. The dimensions of the tables. How many seats per table. Power sockets and wifi info. If banners and stands are allowed. If table cloths are required. If there are volunteers who will cover your table whilst you have a break. This will also be a printable PDF and will be sent to the exhibitors three months in advance.

There will be a simple one-stage table booking system. You select your table requirement, input your details, attach your icon jpg and press ‘pay’. A confirmation email arrives and you are done. If I want to sit in a room filled with tables and chairs and no customers I will spend my day in Furniture World in Plymouth. Publicity is the most important thing after LOCATION, DATE, TIME and is often forgotten. I’ve heard one organiser actually say publicity is the responsibility of the exhibitors. It is not.

At Ideal Con marketing and publicity will always be at the top of the Ideal Con organiser’s (ICO) to-do list. At the TOP. With its own budget. Its own team. Enough money at least for a BIG sign outside the venue, and maybe a couple of sandwich boards (LOCATION, DATE, TIME) around town.

ICO will have been tweeting and facebooking regularly throughout the year about plans and progress, guests, exhibitor profiles, comics they are enjoying, anything to remind people about what’s going on. In the couple of months before this will go into overdrive. ICO will tweet until we are sick of him/her but at least we will know that something is happening.

ICO will have sent press releases to local radio, listings websites and newspapers, who are always on the lookout for something colourful and interesting, even if that means putting up with the WHAM! POW! headlines and having to have his/her photo taken standing next to a stormtrooper or Pokémon or whatever.

ICO will have talked to the local comic shop, library, the bookshop, art supplies shop, cafes, other businesses near the venue who will have posters (LOCATION, DATE, TIME) in their windows or flyers (LOCATION, DATE, TIME) by their tills. Maybe they will be providing sponsorship, offering discounts to attendees, hosting events or exhibitions in partnership? Shops like this kind of stuff.

Similarly, ICO will have contacted the local art college/higher education institution. This might even be the venue, or be hosting a related event itself. The college will have posters (LOCATION, DATE, TIME) and flyers (LOCATION, DATE, TIME) and may even supply volunteers in return for a free table to show off their coursework or a goody bag, or voucher of some kind.

There will be one catch-all email address. Emails between ICO and exhibitor will be friendly, short, to the point and only as needed. A final reminder will be sent a week before the event with that PDF attached.

Organisers are going to be restricted by their venue. Health and safety will play their part and often the more affordable the location, the least suitable it is. There’s only so much you can control but ICO will keep these things in mind:

Exhibitors need space to sit comfortably. They will have bags and boxes. They might have display stands and pop-up banners. These need to be taken into consideration in the layout. Set up a ‘pretend’ exhibitor table and see how much floorspace it actually needs. If there are odd-shaped spaces and corners they should have alternative use: exhibitions, reading areas, kid’s drawing tables. Exhibitors should not be shoe-horned into the space.

If the venue is split into different rooms then there need to be clear signs and a layout that ensures a flow of visitors to those rooms. Perhaps the connecting corridor is an exhibition space. There should be table plans stuck to the wall at various points.

At Ideal Con there will be an information point, separate from the ticket office. The person at the information point will know where the toilets are, what time things happen, where the cashpoint is, where extra chairs can be found, if blutack is allowed, if the heating can be turned on/off. It is the ICO’s headquarters during the event.

ICO will visit the venue many times before the event. He/she will do a walk-through, imagining what it will be like for the exhibitor and the visitor alike. Where are signs needed? Where are the annoying columns? Where are the tricky bits for wheelchairs? Room plans are deceptive, and guesswork is not enough.

The venue will have free entry, if possible. Exhibitors are happy to pay a higher price for a guaranteed footfall. ETA: Cliodhna Lyons commented via Facebook that free entry is not always a good thing: “you want the numbers in but you also want the right people in”. A token charge will discourage those who are not really interested but not those who are interested/curious. 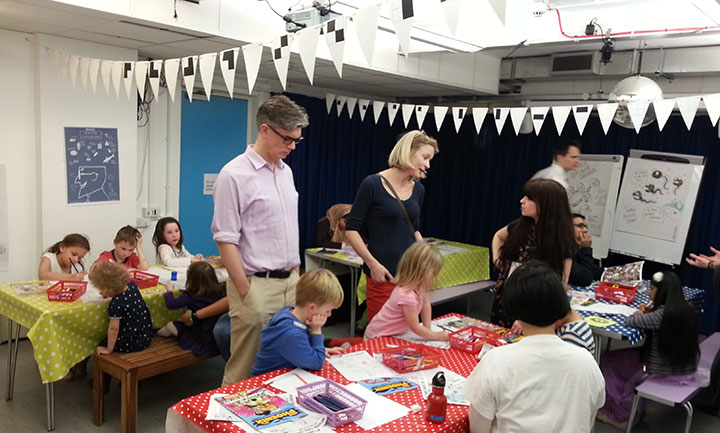 Children read comics. Some people make comics for children. This should be encouraged. Children are Future Punters. That middle-aged guy with the Dredd t-shirt is going to have a heart attack at some point about some continuity error or something and needs to be replaced. Ideal Con will offer exhibitors the choice to be part of a kid’s zone. There will be drawing tables with comics on them. Some simple workshops with printed handouts. Maybe the library could be involved – many have comic book reading groups.

There will be a pub, preferably hired for the event. The after-event pub session is one of the most important aspects for the exhibitor. Ideas are shared. Deals are made. Friendships forged. Acquaintances renewed. No loud music because then we can’t hear each other – dancing comes later. ICO will be sitting in a corner, basking in the glow of a successful event and happy exhibitors.

That’s my idea anyway for getting the basics right. Panels, interviews, after show parties and the other bells and whistles are only considered once these things are sorted out.

Thanks for reading all this way! Any suggestions? Comment here or tweet @davidoconnell and I’ll add them in.

One thought on “An Exhibitor’s Wishlist for Comic Conventions”