Autumn had a gentle start in these parts: September was warm and lovely, and great walking weather for those of us with small, dog-shaped obligations. Now rain and wind threaten business-as-usual and the thermals and waterproofs come out.

I’ve been amazed by the abundance of conkers on the ground but then everything plant-related has had a good year, apparently. We’ve been lucky to have vegetable plot surplus from in-laws, and the community allotment in the park regularly leaves out an assortment of veggies and an honesty box for passer-by to help themselves.

There don’t seem to be many takers for the conkers – they would have been eagerly collected ‘in my day’, when the boy who lived across the road taught me the various methods for strengthening them in preparation for battle. There was a debate over whether this was considered to be cheating or not. I kept my champion 42-er for years until it finally disintegrated into dust, and I can never resist picking up a few of the shinier specimens just in case I receive a call to arms once more.

Although having a dog does have its downsides, I’ve really benefited from being forced to leave my desk for at least an hour or so each day. As well as getting some exercise and an important break from work, I’ve watched the seasons change, heard the gossip from all the other dog-walkers, seen what’s changing in the neighbourhood (new shops opening, seeing who’s having an extension built or garden re-landscaped, and, slightly more randomly, getting to watch the big top of a circus put up in the park).

It’s made me feel more connected to a city where it’s easy to feel isolated, especially if you spend your days hidden away in front of a computer screen.

I’m currently producing the illustrations for the first of two chapter books. I’ve not written these books and it’s been a lot of fun interpreting someone else’s text. The deadline for the first book has been very ‘ambitious’ in publishing-speak (‘insane’ in Dave-speak) but thankfully my Cintiq has really come into its own. I completed fifty greyscale illustrations in seven days – without any stress – and I’m personally pleased with the way they turned out, which is unusual for me. Let’s hope the publisher likes them too! Here’s a sneak peek: 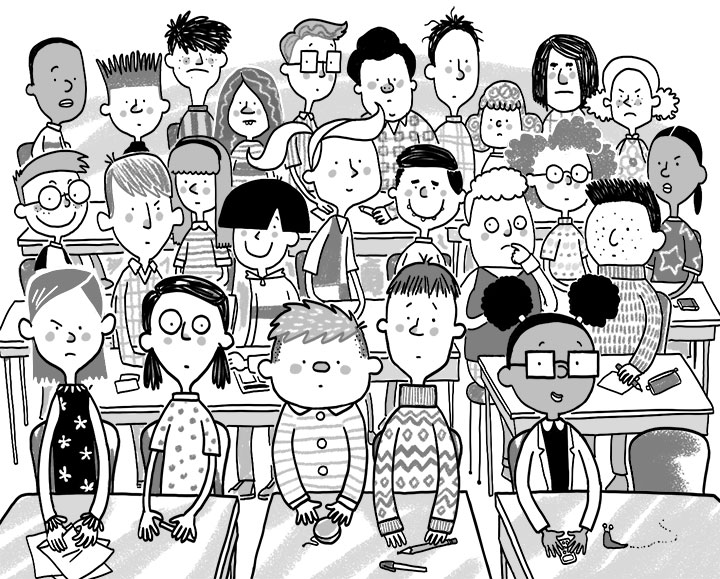 I’ve spotted Jampires in my local Sainsburys, where it’s part of their Hallowe’en seasonal promotion and is reportedly selling well. Jampires isn’t really a Hallowe’en book but I’m not going to complain! To see Jampires sitting so close to Monster & Chips in the same shop was pretty exciting for me. Also, Nectar points!

I watched Stephen Fry give a talk last week at the Festival Hall to plug his latest volume of memoirs. A lot of well-known authors do these big auditorium events for their book launches, including some children’s writers, and I was interested to see how he approached it. He spoke non-stop for over an hour, completely unscripted, which I suspect is not something that troubles him particularly. He is a non-stop anecdote machine – he said his memoir is very gossipy – with each sentence spoken triggering another reminiscence. 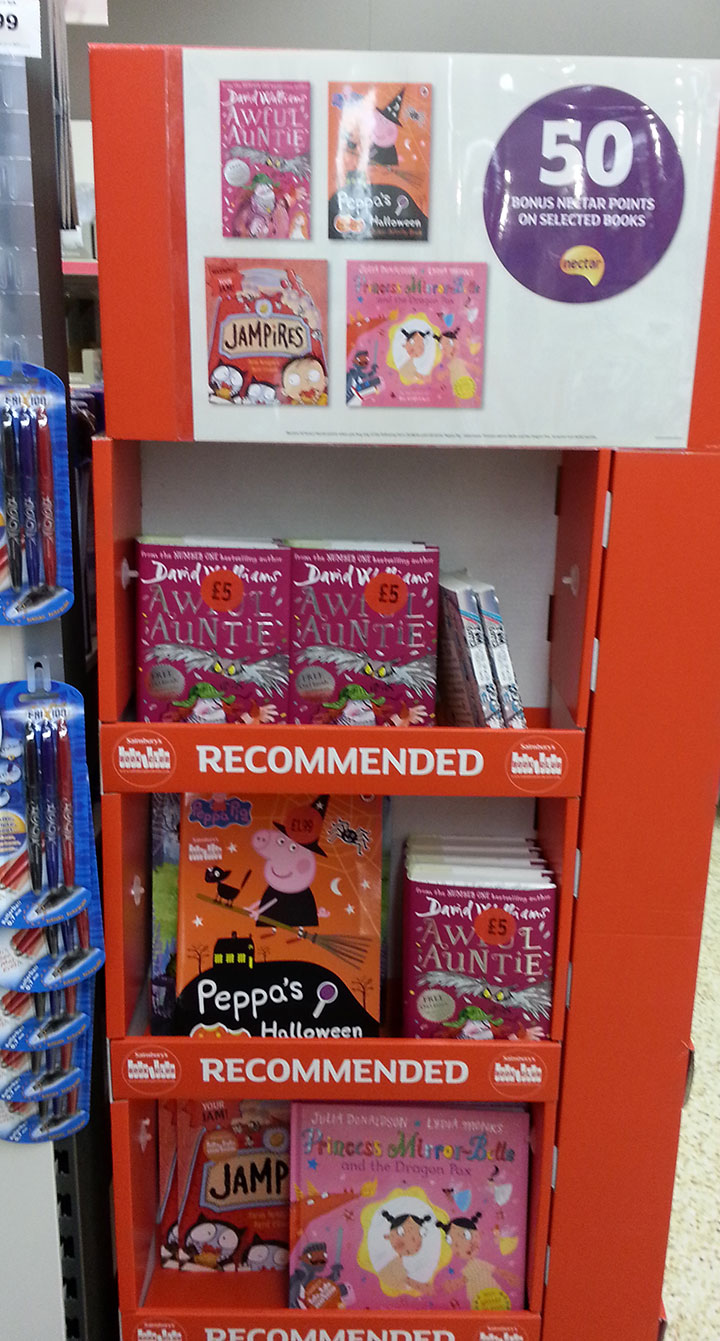 It was all very fascinating but a little tiring after a while, a bit like being trapped at a party with a chatty person who keeps talking whilst you nod politely and scan the crowd for an escape. The main thread of the monologue (I think, as there were so many digressions) was about how an early love for the works of Oscar Wilde made him appreciate the power of writing to transport the reader. Something like that. Anyway, we got the book so job done.

The international book fair in Frankfurt is this week, one of the two book fairs of the year that drive the children’s book market. I’m represented in a couple of places, but was very pleased to see my upcoming picture book in the HarperCollins Children’s Books catalogue: When I’m a Monster Like You – illustrated by Francesca Gambatesa.

This is the only image I’ve seen so far and it makes me very excited to see how Francesca’s interpreted the rest of the story! The catalogue says it’s not out until January 2016 which seems like along way off right now but I’m sure it will go quickly. More about this book (and the two others in the series) in the future. 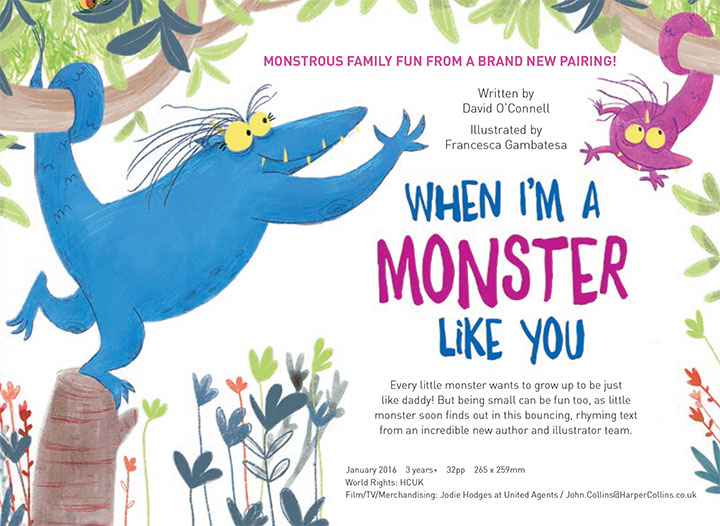 Everyone loves a bit of fan mail – I do particularly! These letters and pictures have come all the way from Monster & Chips readers (and superb artists) Sammi and Olivia in Australia. Love the colours on these – I’ve not used felt tip marker pens in a long time but these make me want to crack open a pack and get colouring. 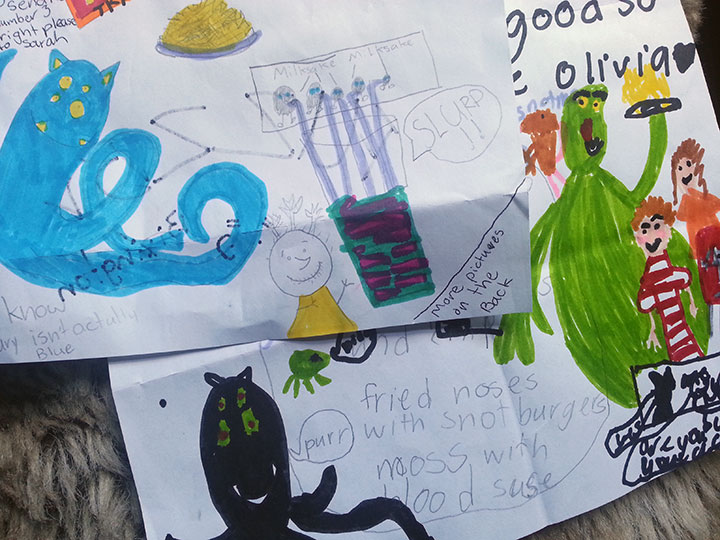 Brilliant! You can see more of his reviews here.

And here’s a recent and intriguing tweet about Jampires: 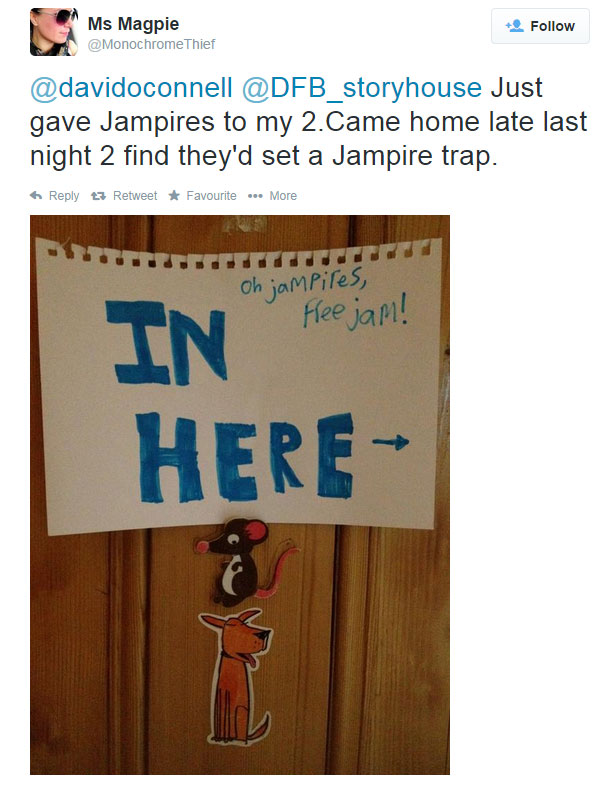 I wonder if they caught anything? Finally, my talented and very busy friend Richy Chandler launched not one, but four comics at fabulous comics boutique Gosh! a few days back. He upped the bar for comic launches by performing song interpretations of the stories (take that, Stephen Fry!).

Richy gave a bit of background to the publications in a short interview with Alex Fitch of Panel Borders. They showcase his talents as a writer and artist (and, from what I know of making anthologies, his skill in wrangling comics artists), and his ability to work in several genres.

His teen-focused webcomic Lucy the Octopus has a new print edition. Poor Lucy gets treated miserably by everyone, but actually finds some friends this time (at least, temporarily). The webcomic updates every week here. Then there is Rosie & Jacinda, a comic that started as a collaboration with artist Zarina Liew. In this bumper edition of the teenage romantic comedy several other artists join Zarina in art duties. It’s a beautiful looking book and a lot of fun to read. It’s very funny and the accompanying song that Richy and Sally-Anne performed has been buzzing around my head ever since.
Finally, Tempo Lush Tales, a chunky anthology containing stories from a variety of genres, illustrated in a variety of styles by a number of excellent comic stalwarts.
There’s buying information here, but do pay a visit to Richy’s table if he’s at a comic convention near you, as his table display is always very well thought out and eye-catching.