My advance copy of MONSTER & CHIPS arrived on Saturday! It’s pretty much a year since I signed the contract with HarperCollins – can’t quite believe I’m seeing the finished book in my hands (apologies for the terrible photo): 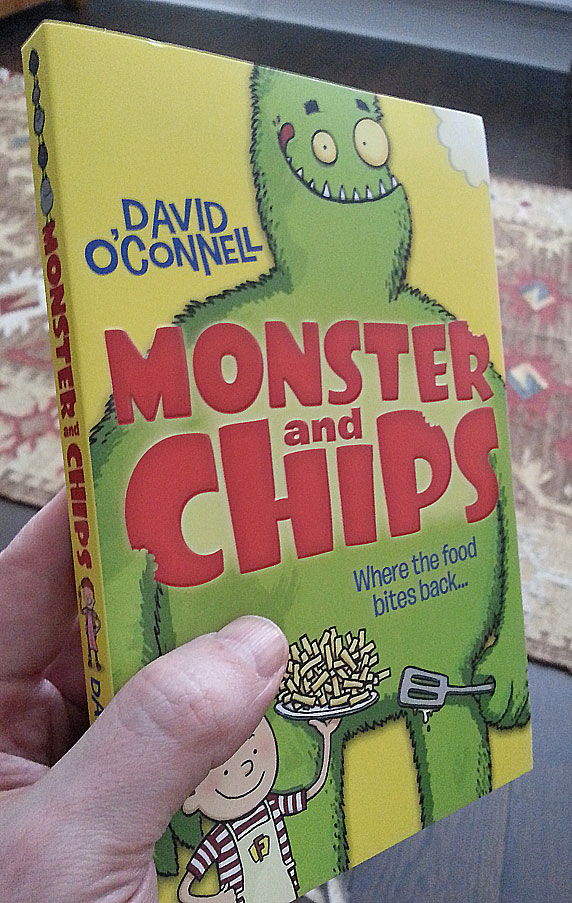 And I’ve had some badges made too! Joe, Fuzzby and Barry flavours:

You can buy these from my MONSTER & CHIPS page if you like!

Some more reviews are in: this time from Love reading 4 Kids. This is great because the reviews are from proper young readers – all the more meaningful. My favourite line is from Adam, aged 9, who says: “It is so gripping that you will be attached to it like cheese on toast stuck to the carpet.” Brilliant!

Don’t forget I’m doing a couple of workshops on Friday as part of the Imagine Festival at the Southbank. Book here for your place (ages 7-11)! 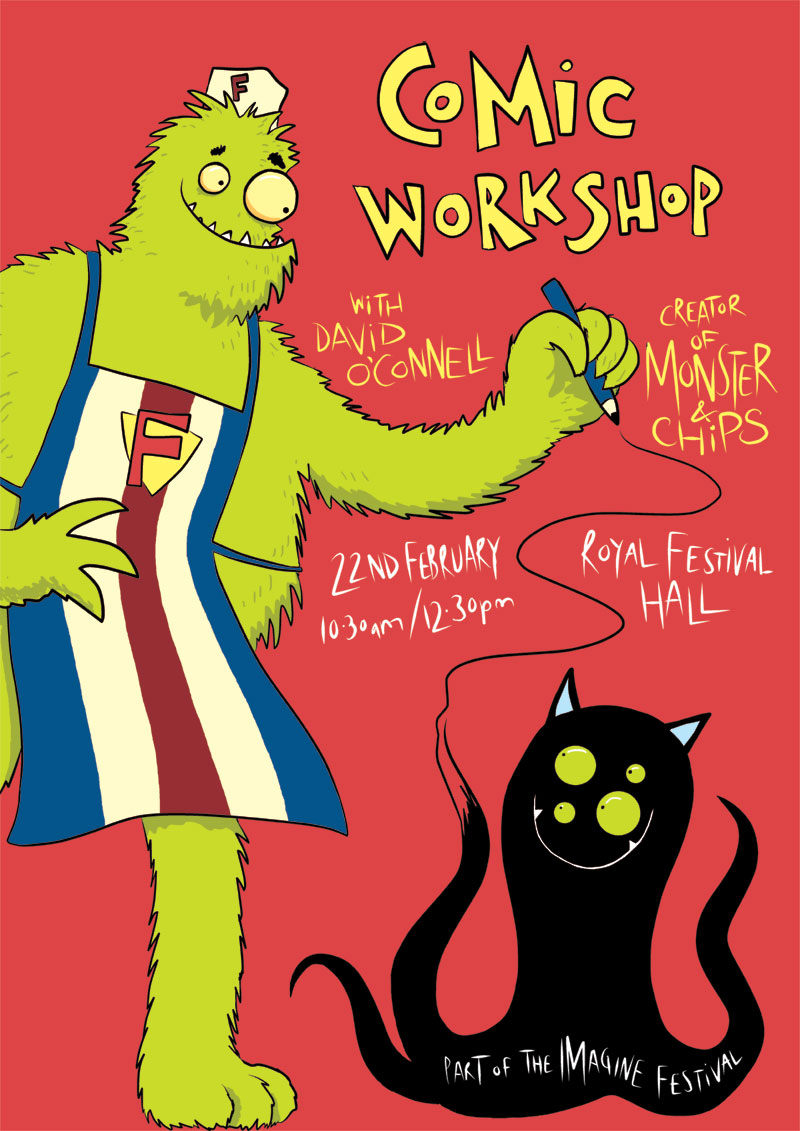 I’ve got tons of writing to do, so there won’t be any pics this week, I’m afraid. I’ve also got a huge backlog of diary comics to work through. *wipes brow!* Right – back to work. Derek Danger is the creation of Cadballs, aka Warwick Johnson-Cadwell and Robert Ball. Their comic is serialised here – and a print edition is promised too. Dangerous stuff! Bit of men’s fashion, courtesy of Gucci. There’s not much to be done with a suit, to be honest. [Source]

Ugh, the muse isn’t with me today. Never mind, lots to do so that muse is going to have get on a bus and get over here, pronto!

I’ve always had a soft spot for the character of Airboy, who first appeared in Air Fighters Comics, published by Hillman Periodicals in 1942. With his sentient ‘plane Birdy (that flapped its wings) he battled Nazis, giant rats and other villains. Created by writers Charles Biro and Dick Wood, and artist Al Camy, he disappeared from the comics world when Hillman ceased business in the 1950s. I discovered him through the revamped version published by Eclipse Comics in the 1980s. I loved this version at the time, although looking back now, he mostly spent his time killing communists and banana republic soldiers! The rights to the Eclipse character were bought up when they too ceased publication, but the ‘Golden Age’ character is in the public domain so can be used with a clear conscience! I’ve always thought he might make a good Tintin-style adventurer, perhaps something along the lines of the Disney Talespin cartoons from some years back (themselves influenced, I think, by Tales of the Gold Monkey from even earlier), or the Porco Rosso characters from Studio Ghibli. Either way, here’s my take on him. Last night I went to a screening of Beasts of the Southern Wild at the May Fair Hotel, a charity do in aid of Oxfam. I’d never heard of the film before, but it was highly recommended by some friends and as this particular event was for a good cause it seemed like something fun to do. It was introduced by actor and film-maker Simon Pegg, who enthused over the remarkable performance of the lead actress Quvenzhané Wallis, who at aged nine  is the youngest ever nominee for the Oscar for best actress. She plays Hushpuppy, a child growing up in a bayou whose future is threatened by rising sea levels and the mysterious aurochs, released from their prison in the melting ice caps. I thought it was a fascinating and enchanting film, part fantasy, part family drama, part eco-disaster movie. One of my friends said that each person would come away having seen a different film depending on their own circumstances.  To me, it was about the relationship between the girl and her dying father, who was vainly trying to protect her future from the forces of nature and interventionist authority. Well worth a look. If you know a young person in need of some activity during half-term week, I highly recommend the Imagine Festival being held at the Royal Festival Hall – loads of stuff for kids involving dance, literature, theatre and art.

I’m delighted to say that I’ve been invited to take part, so I’ll be running two comic-making workshops on February 22nd, at 10:30 and 12:30. With me in the foyer of the Festival Hall will be Sarwat Chadda, author of the Ash Mistry Chronicles, who’s doing a creative writing workshop and Clara Vulliamy, creator of Martha & the Bunny Brothers, who’ll be showing you how to make felt bunnies! Perfect food for monsters. It could be chaos, it could get messy, it WILL be fun! All the booking information can be found here. (Recommended age 7-11) I took last week off from the daily sketches – too many other bits that needed doing and there were some things I drew that didn’t want to post publicly. Whilst I’m going to try and post something everyday, I’m not going to sweat it if I don’t.

I drew Hoppleby a little while back and quite liked him as a character. Here are some follow-up sketches.

Only 28 days to go until the publication day of MONSTER & CHIPS! I’m afraid I’ll be harping on about this quite a lot but I’m so excited to have my first book for sale! I’ll be posting some sneak peeks here but in the meantime feel free to pre-order at Amazon or other online booksellers (though you should always support your local bookshop if you can). I’ve head the book will be on sale in Asda supermarkets too, which is great news. Need to have a lie down now. I don’t want to make this blog into a dog-blog as it’s a bit of a lazy option and can sound like one of those parents who is constantly going on about their adorable child. But there’s no denying there’s plenty of material to be had out of our pup, Treacle, who’s currently recovering from being spayed. Here’s a selection of events. I decided to leave out the potentially controversial “Daddy’s penis isn’t a chew toy” episode.

Here’s the lady herself, taken by our friend Kim: I used to hate drawing cars: no straight lines, all subtle, aerodynamic curves. A nightmare to draw in perspective. Good job I’ve given up on reality! I’ll try to get some colour on this later.

In other news I’ve already had one review for my book MONSTER & CHIPS, which isn’t even in the shops yet, from the wonderful people of Mr Ripley’s Enchanted Books. Take a look. Spera is an all-ages graphic novel written by Josh Tierney and gorgeously illustrated by a number of famous-in-the-indie-world comic creators. It was Kyla Vanderklugt‘s name that drew me to the book, which was published about a year ago, as I’ve been a fan of her work for some time. But there’s a generous helping of equally talented individuals here who bring the fantasy world (or country, to be precise) of Spera to life (including UK favourite Luke Pearson).

Originally a webcomic, Spera tells the tale of two very different princesses, Lono and Pira, who flee a war between their respective countries. Guided by a shape-changing fire spirit, they travel to Spera, a land inhabited by creatures of magic, to seek their fortunes. Although polar opposites, the two girls quickly become sisters to each other and the relationship between the two and the benign fire-spirit is warmly and vividly written. For my taste, the balance between character and plot is a little skewed – I would have liked to have had a bit more direction to the narrative which wanders less purposefully than the two princesses, but as this is just the first in a series of books it may be that Tierney is taking a long-term view.

Certainly, the combination of chapters and short stories make for a satisfying read over-all and I look forward to the second volume which comes out in March this year (it’s available digitally already). The hardback book is also beautifully produced and is a quality piece of work all-round. Published by Archaia. Solid gold, these ideas of mine. S-O-L-I-D G-O-L-D. Just a quick sketch today as I’ve lots I should be doing. Trying to keep my mind occupied as my puppy has gone to the vets for spaying *anxious parent sob*. A look to kill for. [Source]

I used Manga Studio to sketch this. Not the most intuitive of programs but some nice effects to be had.