It’s the Jubilee! And what better way to celebrate than spending your Sunday watching someone’s granny sitting miserably on an old barge in the pouring rain? Hurray! Or Philip on a surf-board? You never know.

This image is available for licensing for use on tea towels, mugs, etc. Or, if you’re working class or a cockney, perhaps you’d like to get a tattoo made? Happy Jubilee everyone! I’ve had a few moments of epiphany in comics, and one of them was when I discovered the artist Moebius, who died at the weekend. There’s never been anyone with his vision; I’ve sometimes (whimsically) even thought his art was evidence that there was extra-terrestrial life, as his imagination was never earth-bound and far out of reach of anyone on this planet.

If anyone says “there’s no such thing as a new idea”, tell them: look at the work of Moebius. I should have posted about this a while ago: Paper Science 7 is out now, and I’m delighted to have been asked back to contribute a comic for it. I love the newsprint format for comics and PS has been a particularly impressive example. I talk a bit more about it in a short interview with editor Matt Sheret that was published on the Forbidden Planet blog, and there are further interviews with contributors Marc Ellerby, Josceline Fenton, Philippa Rice and His Majesty the King of Things.

All the editions of Paper Science can be bought from here, or at good comic shops. Very much recommended. 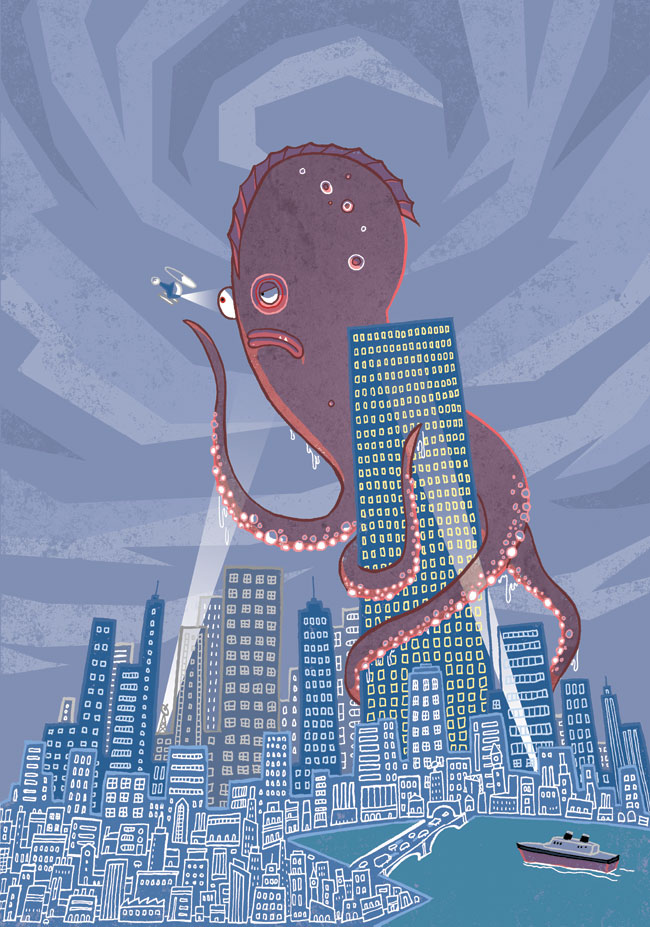 The above pic was an updated version of a squid-monster-attacks-city scene I drew several years ago but which has always been popular seller as a print at comic conventions. I’ve been giving my portfolio an upgrade (a work-in-progress, as these things tend to be) so I decided to redraw it using the style that I’ve developed since the original was created. You can’t go wrong with squid monsters.

What else am I up to? Here’s the current “to do” list (in no particular order):

Plus redecorate the flat, redesign the garden, etc, etczzzzzzzzzzzzz. That will do for now, perhaps? Things I learnt at the bananas-but-wonderful MCM Expo this weekend: It’s the MCM Expo this weekend! It’s the UK’s nuttiest comic convention – me and the Flash will be there with a load of (new) fan-art prints. Superheroes? Got it covered. Game of Thrones? Check. Hobbits? Of course! Random nerd stuff? Naturellement.

I’ll be sharing space with a table buddy of old, Cliodhna Lyons, who I understand will be cosplaying in an outfit that uses an aggressive amount of pink. Come and say hello (and start your Xmas shopping early) at table H3! I’m honoured to say that I’ve been included in an exhibition of self-portraits by comic artists, curated by Camila Barboza, that’s taking place at the wonderful Orbital Comics in London. There are pics by a number of small-, medium- and large-press favourites such as Joe Decie, Adam Cadwell, Ellen Lindner and Gary Erskine, as well as me on a giant blue chicken. Here are some photos from the launch, but do take a look in person if you’re in the area. The (free) show runs until the 15th October.

Speaking of comics shops being wonderful, the amazing GOSH! is hosting a comics discussion group in their fantastic new premises, organised by Mike Medaglia and Mark Haylock. They’ve had the innovative idea of discussing one mainstream book and one small press book, and I’m thrilled that they’ve decided to make Tozo their inaugural read alongside the mighty Watchmen. The group kicks off on October 12th. Contact Mike and Mark via Facebook (link only works if you’re logged in to FB) or through thinkingcomics.com. Come along and talk comics! Some characters from various different projects I seem to find myself working on simultaneously – some in the pipeline, others may never see the light of day. All good fun, though.

I’ve realised that one project I’ve not actually mentioned on my own blog is ink+PAPER, a comic magazine I’m editing and publishing, due out in November. I’ll do a proper post on its origins at some point over on i+P blog but for now go and click on the links of some of the people who are taking part – there’s lots of good stuff there and I’m very excited about this particular enterprise. The response has been gratifyingly warm – it seems to be an idea with which people have really connected. More on that in months to come. In the nearer future, a couple of events: New Cross Turn Left (above) – a comics garden party in the south London neighbourhood of the same name, initiated by Ellen Lindner. It’s free entry and there’ll be comics, cake and even a bit of theatre: the premier of the play, “Derek The Sheep and The Quest for the Googly Glasses” written by Gary Northfield. Then at the beginning of August comes Caption, the Oxford comics festival. This year’s official t-shirt (above) is now available for pre-order: details here. It’s proving quite popular, so get yours now. There are loads of great guests coming to Caption – including the one and only Paul Gravett. It’ll be my pleasure to interview him, something I’m really looking forward to doing, though the thought of doing it live is a bit scary. Luckily Paul is full of great tales so it should be fun.

I’ll be at the Zine Fair as part of the Birmingham Zine Festival this Saturday afternoon. I’ve not been to this event before but it looks like a lot of fun and an impressive <insert collective noun of choice> of comickers and zinesters will be there. I’m sharing a table with the jolly Mr Winchester. Looking forward to it!

Caption, the Oxford comics festival (with the theme of austerity) will soon be here and we’re looking for artwork for the souvenir programme:

“As usual we will be creating a souvenir programme and are looking for contributions from the comics community. You don’t have to attending Caption to contribute, as in this year of Austerity we know not everyone will be able to make it along. All contributors will receive a copy of the programme.”

The book will be b/w and A5 in size. Send artwork to jay[dot]eales[at]googlemail[dot]com. As part of the ongoing International Alternative Press Festival, I’m hosting a workshop at the wonderful Orbital Comics shop in London this Thursday from 6:30-8pm. Do come along – no need to book. I’ll be giving a bit of “insight” into my Queen Mum comics, then we shall create STUFF together – it will be a right royal load of fun, plus you can check out Orbital’s wonderful range of goodies too, including their great small press range. Hope to see you there!

Details on all the remaining workshops can be found on this Facebook page. It’s been Wizard Week over at People I Know, home of funny chap and lovely person (both!) Timothy Winchester.

I was asked to draw a wizard for it and I decided on the Creepy Uncle of Rock, Roy Wood from Wizzard. Part of the traditional Xmas Xperience, like some demented parallel universe Santa, Roy’s nails-on-a-blackboard greatest hit has been the soundtrack to many a drunken fumble at the office Christmas party over the years (sometimes even with other people):

I Wish It Could Be Christmas Every Day (YouTube)

Me too, Roy, me too. Merry Half-way to Christmas, everyone!

Next weekend is a chockfull of comics goodness, if you’re in the London area: there’s the first International Alternative Press Festival, an evolution of the brilliant APFs that have been held here regularly for the past couple of years. It all kicks off on Friday with an opening party at The Miller, then on Saturday and Sunday there’s the fair at the Conway Hall.  I’m sharing a table at the fair, but it’s not just about selling comics, zines and whatnot: there are also a series of exhibitions, talks and workshops at various venues in the city centre over the following couple of weeks. There’s a wonderfully varied lineup of stuff to get involved with, so do take a look – or check the team out on Facebook.

I’ve loved the previous alternative press fairs I’ve been to. You don’t often get to see comics next to hand-made books or beautiful art prints, and the exposure to the many different approaches to being creative with ink and paper is truly inspirational.

Also on this weekend is the legendary MCM Expo, an extremely well-organised and totally mad-as-a-bucket-of-frogs event, which is lots of fun. Although I won’t be there this time I expect I’ll be popping over to the pub outside for a catchup with everyone. Sometimes there’s just too much on! My comics are going on a North American tour – without me, however. *sniff!*

This weekend is the MoCCA festival in glittering New York City! I’m very pleased to say that there will be a contingent of Irish and UK comickers occupying no less than three tables at the festival. I hear some of our viking cousins have a regular presence at MoCCA so it only seems right that we should aid their Euro-infiltration of such a prestigious event.

Make sure you visit Tables K10-K12! Regular MoCCA exhibitor Cliodhna Lyons is leading the way – thanks to her for organising the tables and whathaveyou. She’ll be alongside honorary UK/Ireland-ers Sarah McIntyre (who’ll have copies of the Airship comic we improvised a few years back and the Birdsong anthology in which we both have stories) and Ellen Lindner – have you read the interview I did with her?

Darryl Cunningham, creator of the critically-acclaimed Psychiatric Tales will also be there. He’ll be flogging comics by myself (A Corner of Paradise and Kate Middleton), John Miers and sexyman Dr Geoff.

If that’s not enough, the gents of Accent UK will no doubt have a glorious show of books – if you’re into sci-fi of the 2000AD mould then make sure you stop by their table. I’ve been a contributor to one of their anthologies in the past and will be again later this year. I particularly recommend The Man of Glass by Martin Flink who I believe will also be at MoCCA (in the viking camp).

Cliodhna, Sarah and Ellen are then heading over to Portland, OR for the Stumptown festival so any comics leftover from MoCCA will be making their way there. Stumptown always has an amazing lineup of exhibitors – I’d love to get over there sometime.

There’s a small, polite UK invasion of the Toronto Comics Arts Festival this year:  Darryl’s UK publisher Blank Slate are exhibiting, as are Nobrow Press and creators Adam Cadwell, Kayla Marie Hillier, Joe Decie (another interviewee of mine), Tom Humberstone, Jamie McKelvie and Philippa Rice. The lineup for this is particularly excellent – it’s obvious why TCAF has developed a reputation as the finest independent convention in North America. I’ve contributed to Tom’s most recent Solipsistic Pop anthology, an excellent series of books showcasing the best in UK independent comics.

Time Out London has published a feature on Royal Wedding memorabilia, featuring my Kate Middleton comic. “This is the royal wedding souvenir we’ve all been waiting for…” it says and who am I to doubt them. It’s available from the shop along with my Queen Mum comics.