It used to be that I wrote blog posts as a way of procrastinating before work. Now I find that I’m procrastinating before writing blog posts. It does seems a very cumbersome way of communicating news in these days of Twitter and other social media. But it’s a useful way of recording what I’ve been up to so I’m going to keep at it, even if updates get a little few and far between.

I can be found in a couple of social media-type places (above) but here’s a more long-winded catch-up with some things that happened in the latter part of 2015. Mega-post alert!

A second book of Sam Watkin‘s Creature Teacher series came out in August with me on art duties again. Creature Teacher Goes Wild is set at a theme park which meant lots of fun things to draw. Here’s a bit when Mr Hyde and the gang are on their way to Wilf’s Wild Adventure Theme Park – it gets messy pretty soon afterwards: 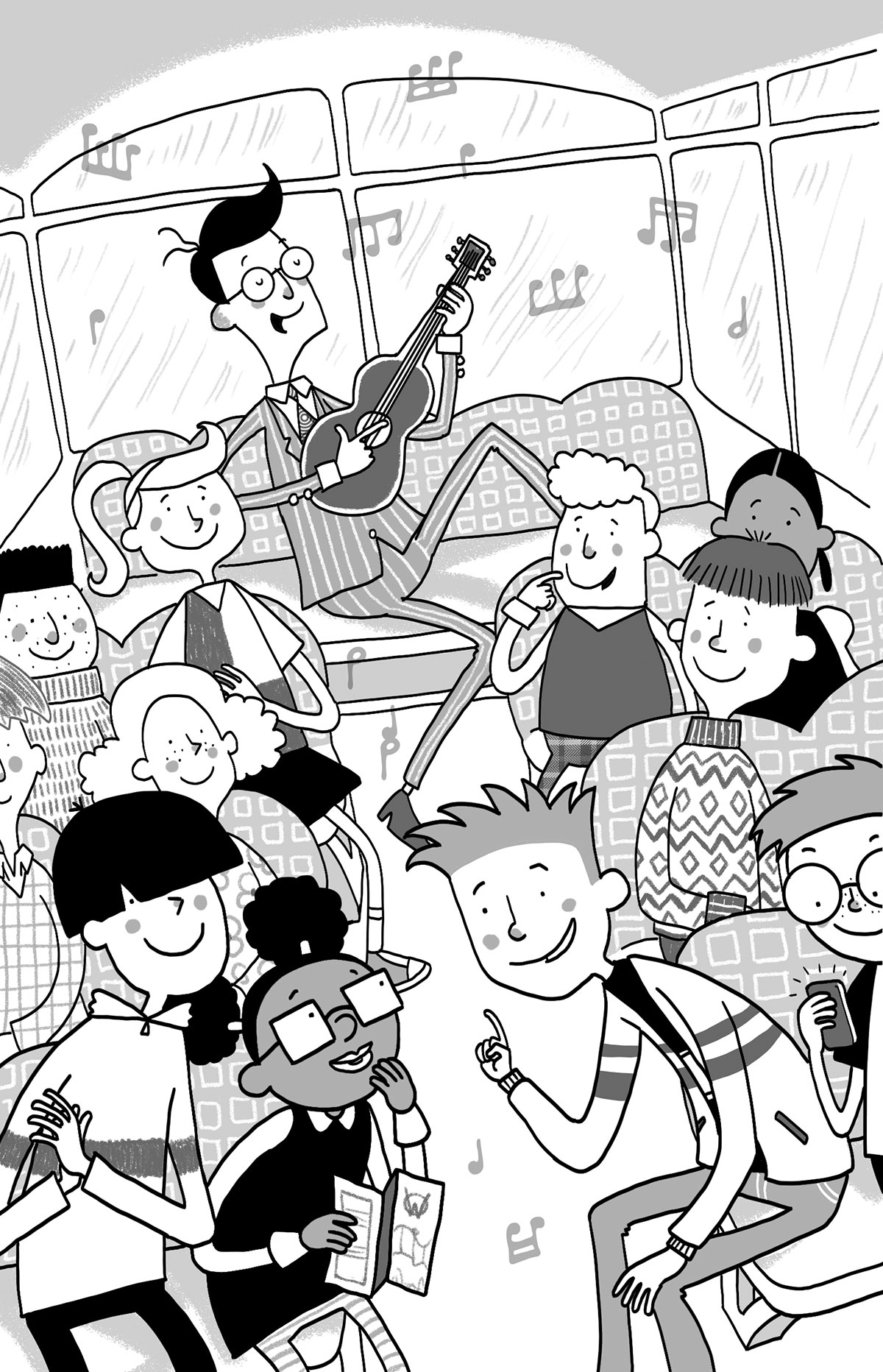 The fourth CT book is due out in July and I’ll be drawing the illos for that any day – can’t wait to get started!

Writer Sam and I will be doing an event together at the Brentwood Children’s Literary Festival in July – come along and say hello if you can. Tickets are available here. 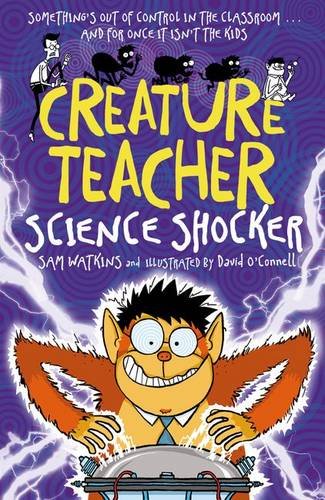 CT is also coming out in Turkish which is very exciting. I love seeing books I’m involved with coming out in different languages! You can find information on all the Creature Teacher books here, or on Creature’s very own website where there are a load of activities to do too.

Speaking of foreign editions, JAMPIRES is going to be coming out in Korean which should be really interesting to see as it’s such an attractive written language. My fab co-author, Sarah McIntyre, and I donned our Jampire gear for a spooky Hallowe’en window-painting session at the wonderful GOSH! Comics in London back in October. It’s very hard to paint on glass, never mind back-to front. I’ve borrowed these photos from GOSH’s Facebook page – they’re both taken by Mauricio Molizane De Souza and there’s plenty more of his ace work to be seen there too. 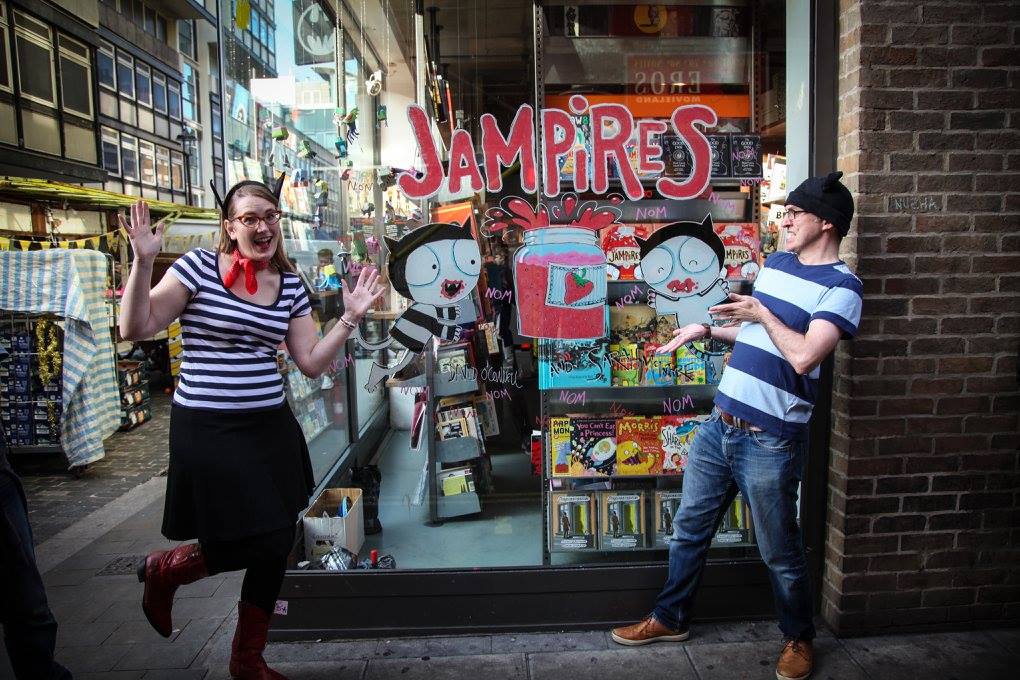 I’ve blogged previously about my friend Alex Milway‘s This Book is Funny initiative and was very pleased to be invited to join him and comics chum Gary Northfield at the Discover Children’s Story Centre‘s summer Storyfest that took place at the Queen Elizabeth Olympic Park in Stratford in July. We talked about our books – all of them funny books – having visited the schools involved in the previous weeks to see what kind of funny stories they could come up with themselves.

It had to be one of the hottest days of the year – not a day to be dressed up as a lion fighting a zebra Roman gladiator. Yes, dear reader, that is me in the furry onesie, having taken on gladiator Gary, and in the middle of my (very dramatic) death throes. A career highlight.

Finally, I’ve recently got to see the artwork for When I’m a Monster Like You, Dad!, the picture book I wrote that is being illustrated by Francesca Gambatesa. It’s been ages coming (for publisher scheduling reasons) and I was over the moon to see the final images. Francesca’s done such a great job so I couldn’t be more happy!

The second book in our collaboration is in production now and will be out next year some time, but WIMLY (as I call it) is out in the beginning of June – just in time for Father’s Day. I’ll be talking a lot more about this before then, but here is one spread from inside just to whet the appetite: As usual, I have a page devoted to the book with all the buying information here.

I haven’t made any comics recently and actually took a break from even going to conventions in 2015. I’ve really missed being involved in comics and I don’t think it’s something you can ever really leave behind, although I know I’ve benefited creatively (and financially) from the break.

However, when my friend Richy Chandler asked me to take part in his anthology that came out in September there was no way I was going to say “No”! The theme of Richy’s book Tempo Lush Tales of the Tanoox was the idea of positive transformation, with the Tanoox being an emblem or totem of this change. I decided to do a short slice-of-life comic, a genre I’ve become more interested in over the years. I’d like to do more with these characters, so might be tentatively dipping my toe in the murky waters of comics at some point this year.

TLTotT is a great anthology, with a diverse set of creators who’ve all taken very different approaches to Richy’s challenge. You can get a copy here, at various comic shops, or at any of Richy’s many convention appearances (and it’s worth meeting him in person as he’s such a nice chap!). His webcomic Lucy the Octopus is back next month after a break  so make sure you bookmark that for some future funny-aquatic-eight-legged reading.

There was a bit of London-exploring done last year – quite a lot of it underground. We went on a tour of the disused Jubilee line Tube station at Charing Cross, that’s now used mainly for film-making (Skyfall being a recent example). We got to walk through the utility passages that stay hidden from passengers, although we could spy on them through the various ventilation grills that you see at the stations (but never give a thought to). The tunnels lead right underneath Trafalgar Square until you’re directly below the now-famous fourth plinth. Mind-boggling stuff. We also visited the deep level bomb shelter that was built underneath Clapham Common to protect residents from the blitz during WWII. Such a huge space! And very easy to get lost down there.

I can’t imagine what it must have been like to be stuck in the shelter when the bombs were falling.  The smell from all the people must have been a bit wearing, at the very least. This shelter was later used as a budget hotel for visitors to the Festival of Britain, and as a temporary home for the first Caribbean migrants to the UK, which is the reason that Brixton and that corner of London became centres of the Afro-Caribbean community. The shelter is one of eight that were built and still exist today – they are mainly used for archive storage, but I think TfL want to try and open more of them to visitors.

Lastly, a trip into the bowels of the iconic Tower Bridge to see the workings of the bascules (as the draw-bridge bits are called). You get to see the massive counterweights that were used in the steam-driven era, and the chamber into which the road disappears whilst its far end goes skyward. You can’t go in there when the bridge is open because you’d get squished!  You also get a chance to visit the old Victorian engine room, as well as the walkways over the road with their great views and rather sick-making glass floors. This publicity video gives a good preview of the tour if you fancy it:

Outside of London we spent our summer holiday in Blakeney, Norfolk. Brilliant beaches, lots of walks through wind and salt-blown scenery and lots of good food.

The dog enjoyed it and so did I!

Now: time to look forward to the challenges of 2016. Onwards! I’m a London-nerd and a history-nerd, so the Spitalfields Life blog is pretty much essential reading as far as I’m concerned. A great mixture of stories and pictures capturing the London of today, and the London that is vanishing or has already vanished.

The launch of the Gentle Author‘s latest book, The Gentle Author’s London Album, took place last week at the appropriate venue of Christ Church, Spitalfields. It was great to have a chance to meet the mysterious person behind this fantastic blog; I love the way it documents the ordinary life of the city, ordinary but not without its quirks. We have some family connections of our own in Spitalfields and the G.A. was able to enlighten us about some interesting leads for investigating further. You can read the G.A.’s own account of the launch here. My bonce even makes it into a couple of the photos. Nice to run into illustrator Noelle Davies-Brock there too.

New in the shop I’ve some notebooks with freaky creature covers designed by me on sale in the shop. A6-sized, they’re filled with blank pages for drawing or writing, or both (if you’re me). They’ll be available at the Comiket and Thought Bubble too. Great stocking fillers! I (sadly only briefly) met up with Sarah McIntyre and husband Stuart, and Will Kirkby for a pint in a recommended pub in Borough on Friday night. An A-Z was required to navigate through the dark and meandering Victorian streets, but cozy beer treats awaited at the Lord Clyde.
According to the blurb, the pub is located near the site of the Tabard Inn (starting point for Chaucer’s Canterbury pilgrims) and Dickens lodged nearby whilst Dickens Snr. was locked up in the Marshalsea debtors prison on Borough High Street. We only talked about comics, of course.