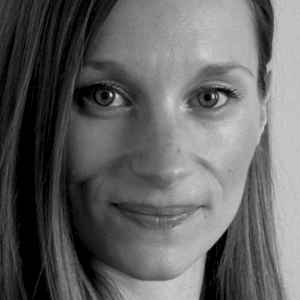 I met illustrator Claire Powell for the first time yesterday – we had a lovely chat over tea and cake in the café at Foyles. I was so pleased to finally be able to tell her in person how much I loved the illustrations for The Chocolate Factory Ghost!

She’s kindly answered some questions for a mini-interview. There are some sneak peeks of her work below, and you can see more in the online preview of the book.

Where are you from?

I’m a Northerner! Originally from a town called West Kirby on The Wirral, which is a peninsula sandwiched between Liverpool and Wales.

It’s a beautiful place with long coastal walks and spectacular views. It’s extremely peaceful and has a much slower pace of life – when I’m stuck on the tube in rush hour I often wish I was there instead! 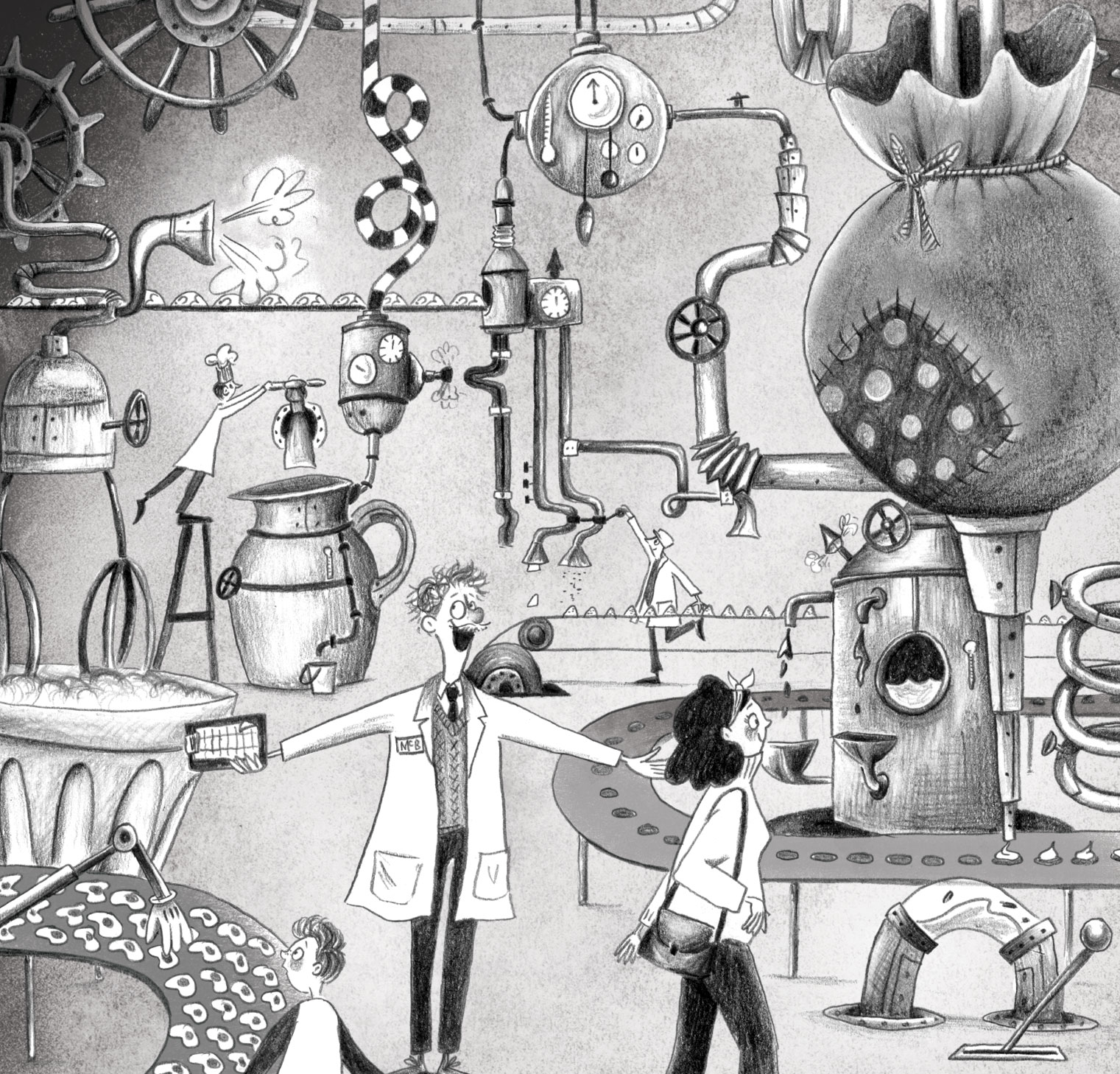 My parents and school friends still live there and I visit regularly. My dad has been a printer all his life, though he’s now retired, and I worked for him when I was a teen in his factory. I loved it.

The smell of the ink, the sound of the machinery – sometimes when I buy a new book it has that ‘factory’ smell and it will remind me of that time. It’s no surprise that I’ve ended up in a print based job.

In ’98 I went to uni in Preston and studied graphic design. It was a very traditional course, weighted heavily toward typography and layouts. I lost count of the hours I spent hand drawing typographic layouts! It was an excellent foundation for the work I do now. I spent a few years as a graphic designer in a Preston agency and, moved to London in 2005 to study an MA in motion graphics. At the time, I wanted to work in TV which is what I did for almost ten years. I worked for an agency called Red Bee and I rebranded TV channels – CBBC, BBCThree, Nickelodeon (India), Dreamworks Animation to name a few. I enjoyed my time there but, as the years went on, I knew I didn’t want to do it forever and I started exploring different avenues. I dabbled in animation before signing up for a picture book course which changed the course of my life!

Where do you work? 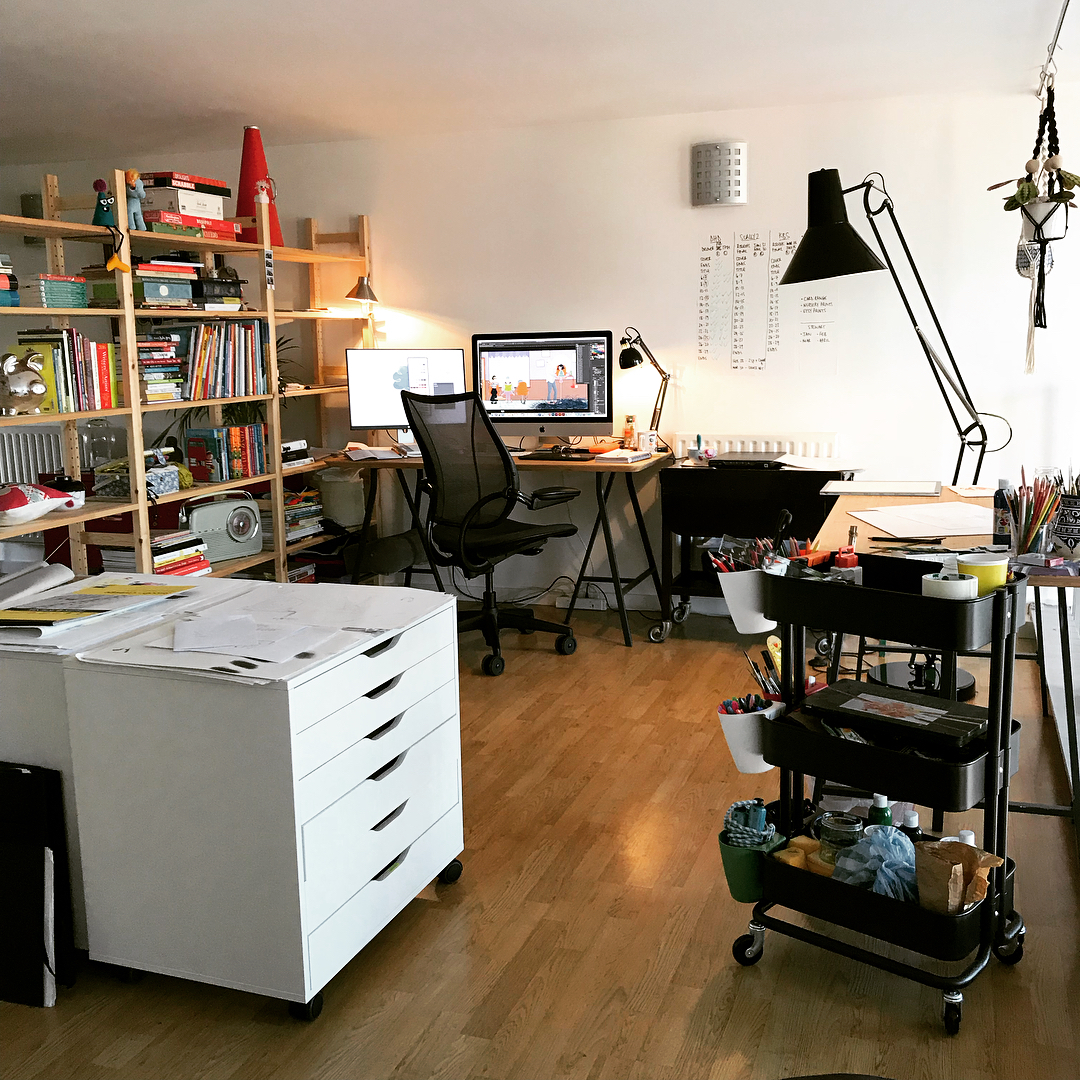 I work upstairs in my flat in Acton! My commute to work is exactly eleven stairs 🙂

I’m lucky as my flat has a mezzanine level which I use as my little studio. It has big windows and a fairly decent view over west London. I’m so happy whenever I’m in there, it’s my sanctuary. I’m not very good at working in cafés, though I’m trying to be better, I end up watching people and doing no work! There’s a yoga studio close to my house and I go there several times a week in an attempt to do some exercise.

What are your influences?

Goodness, this is always a hard question. With social media, we have exposure to so many great things, it can be overwhelming. I think it’s important to take your influences from a wide range of sources and I often take photos of random things and file them for when I need them. It might be a carpet with interesting colour combinations or a tiled floor with a cool pattern, the other day I screen grabbed a picture of Keira Knightly wearing a fabulous retro dress – that will probably end up somewhere…

At the moment I’m researching interior spaces and I’m being influenced by Tony Duquette, a fantastically flamboyant interior designer. I’m starting to put more pattern and detail into my work and I spend a lot of time on Pinterest looking at fashion and interior design. I’m always pinning things ‘just in case’. 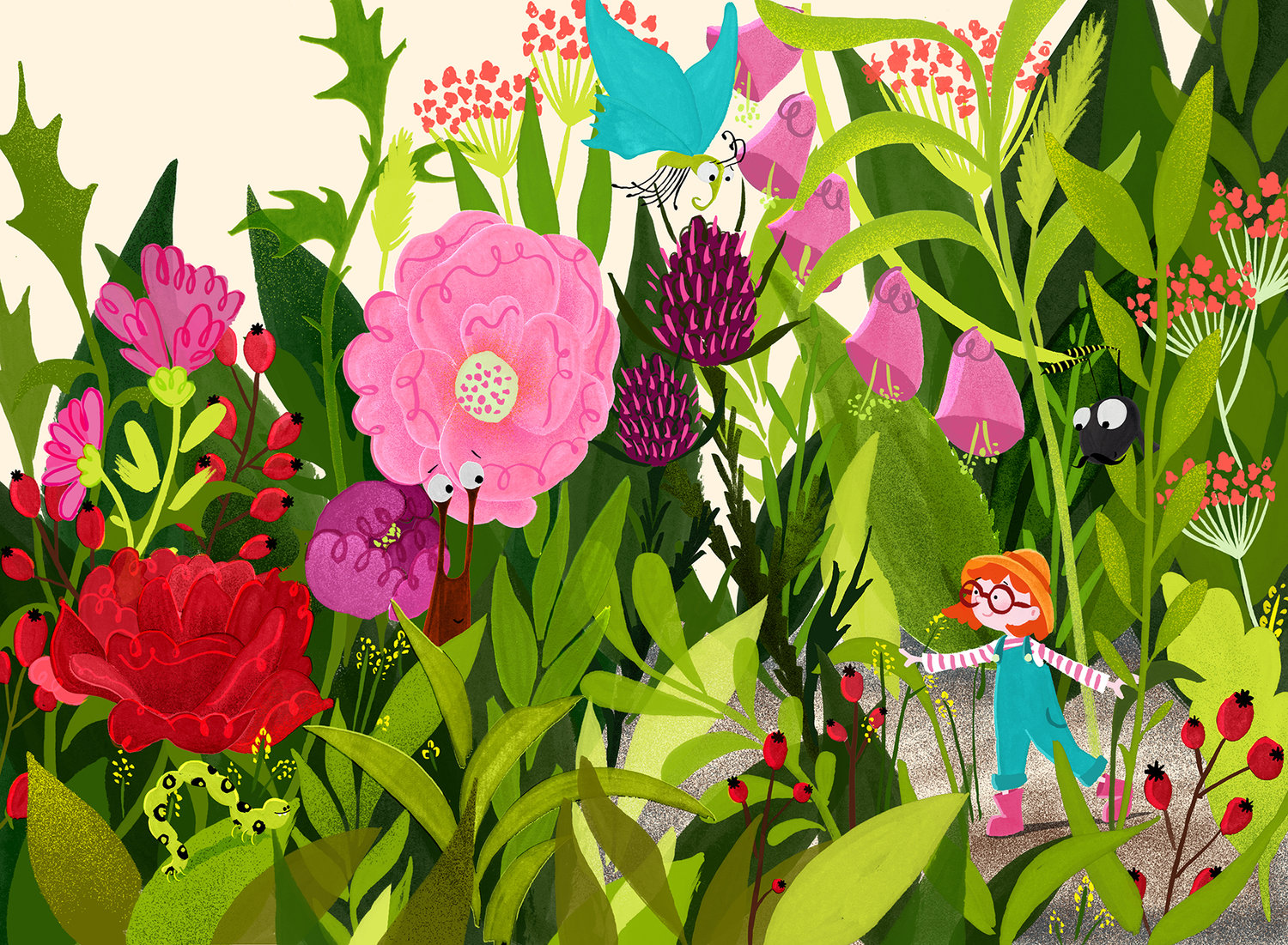 Illustration wise, I love the work of David Roberts – his patterns and attention to detail are stunning and, the fact he does it all in watercolour Blows. My. Mind. My favourite illustrator is Arthur Rackham. His work is so exquisite, I could look at it for hours. I especially like his goblins and elves! I recently discovered the work of Melissa Castrillon and I thought her limited colour palettes were beautiful – I always use too many colours so it’s inspiring to see someone create stunning work with a small palette. I also went to the Tove Jansson exhibition recently and it was magical. I didn’t read her books as a child so it was a real eye opener for me. Such a huge volume of work, a real talent – you can’t fail to be inspired and influenced by people of that calibre.

You’ve worked in animation and graphic design – tell us about some of the projects you worked on.

Well, I wouldn’t class myself as an animator, though I have dabbled in it. It is a craft I have huge respect for. It’s time-consuming and you need to be an excellent draftsman with a lot of patience. I know this because I made a short film a few years ago and I massively underestimated the task! It took me four years to make, all whilst working full-time. There were times I thought it would never be finished but I was determined not to abandon it. It isn’t perfect and, if I did it again (which is unlikely!) I’d do it differently, but I’m proud I made it.

The film is based on true events. Set at the turn of the 20th Century it follows George Edalji, a young man who, after a series of disturbing events, is accused of a ruthless crime. He appeals to Britain’s most famous crime writer, Sir Arthur Conan Doyle, for help. He embarks on a passionate campaign to clear George’s name and, well… I won’t give the ending away!

How do those experiences influence your illustration and book work?

Training as a graphic designer has definitely informed my illustration work. I was taught a very traditional approach, tight grids and layouts, lots of typography, often drawn by hand and the simplicity of ideas was drilled into me – it shouldn’t take more than a short sentence to explain your idea. Those things have stuck with me and I see them appearing in my work now.

I think I have a natural aptitude for showing character expression but working in TV taught me how to tell a story in a short amount of time. Storyboarding, sequencing, composition – all directly translate into my illustrations, especially children’s books where I’m telling a narrative over a series of page turns. I often think of my characters moving, I imagine how they would walk or react to a certain situation (sometimes I act it out!) and then I try to capture that in a single illustration. Expression is so important to me and I want it to be at the forefront of my work. 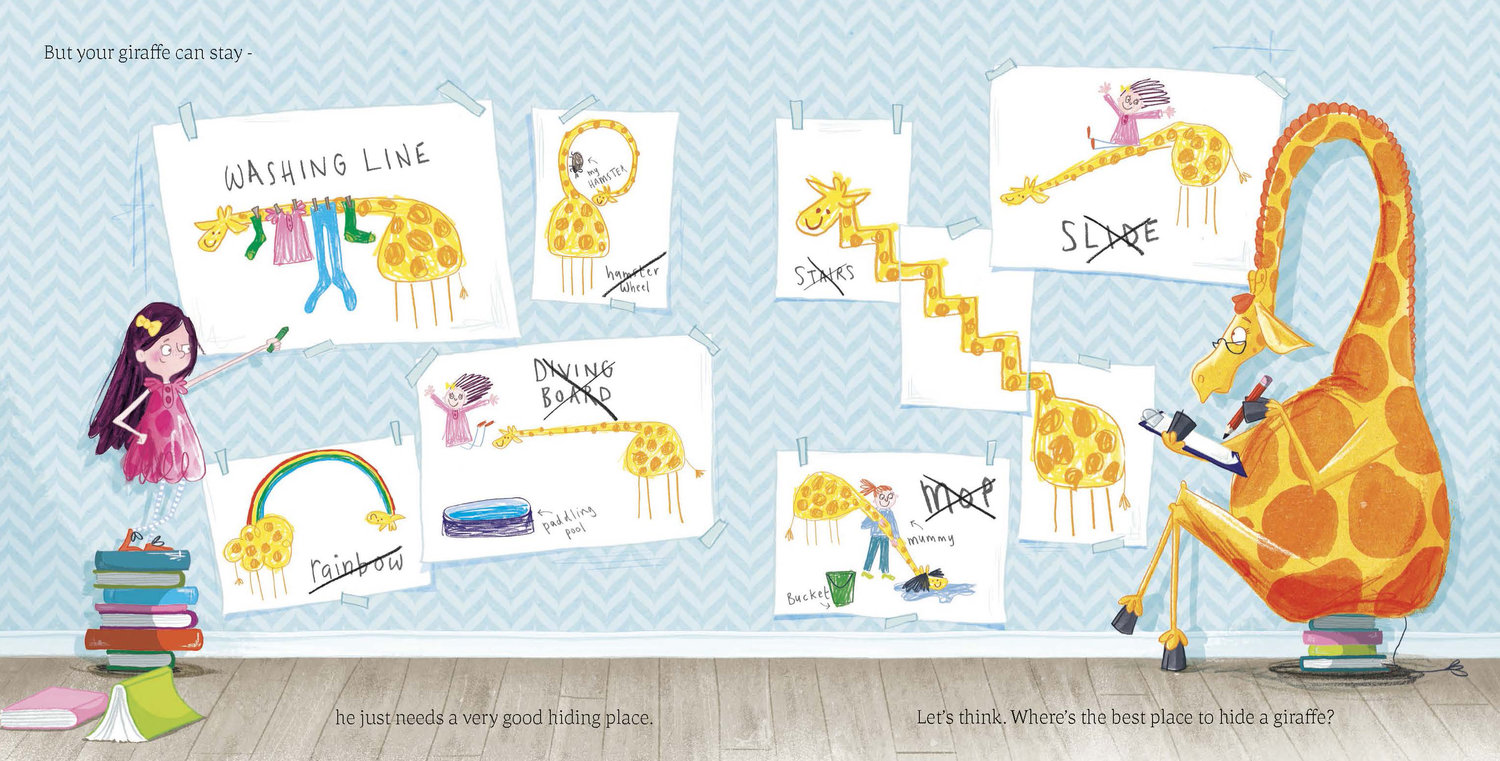 [From Have You Seen My Giraffe? text by Michelle Robinson, Simon & Schuster (July 2017)]

Even working for my dad, in his factory, has been incredibly handy – I understand the print process which helps a lot when you’re making books and delivering files. I never would have thought, when I was fifteen, that what I was learning would turn out to be so useful.

I used to feel disappointed that I was arriving at illustration a bit later in life, but now I see how the years of training in design and TV have been great ground work for where I’m at now. 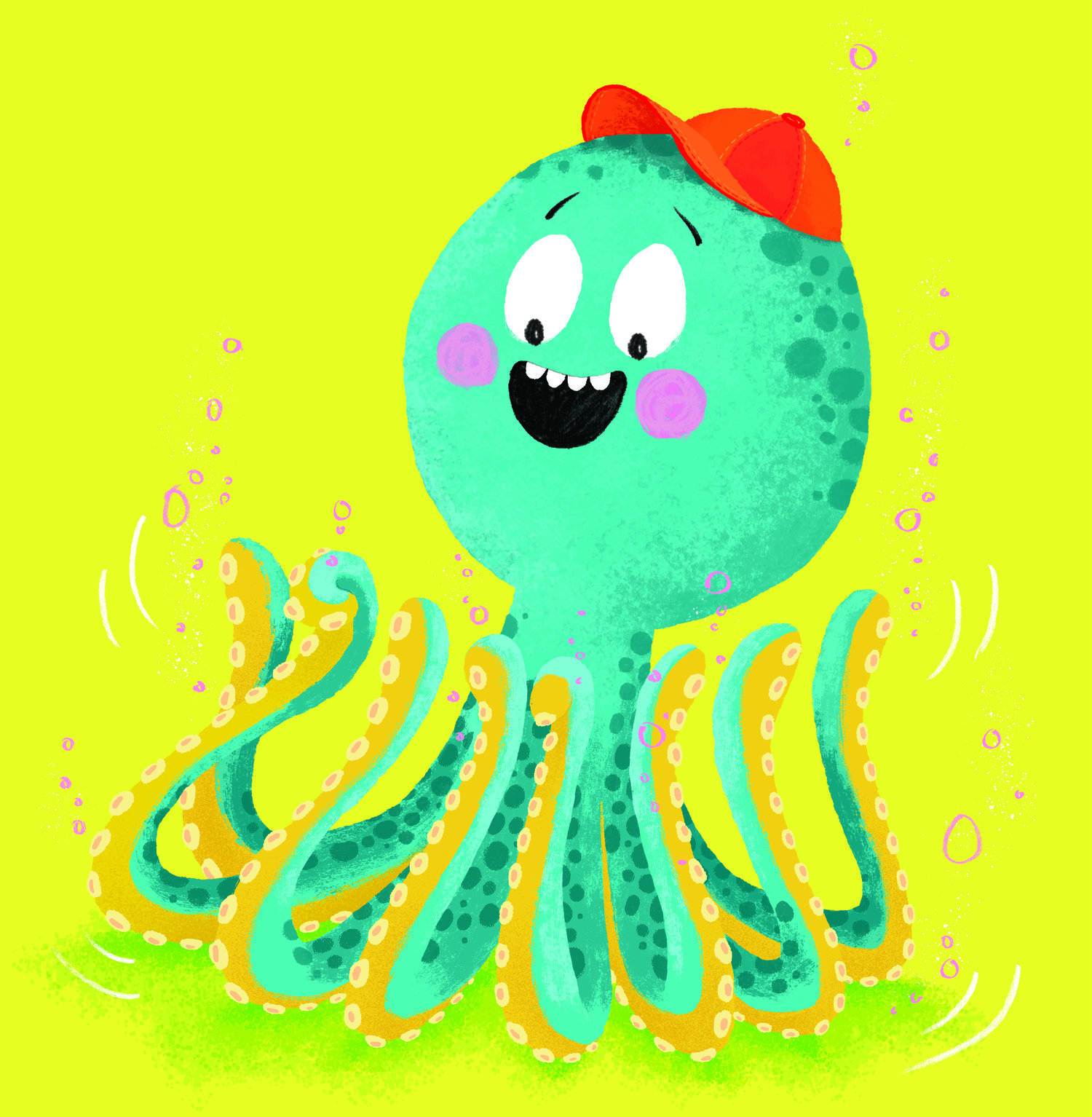 How do you approach illustrating a chapter book like The CFG?

It was my first chapter book so I was beyond excited. I’d done samples of the characters and one full-page illustration (the greenhouse) so when I was commissioned I already knew how the characters looked.

Bloomsbury sent me a detailed brief, for the forty interior illustrations and the cover. I enjoyed the process of working to a tight brief. There was heaps of room for me to play with but it made a nice change from working on a picture book where there’s a lot more freedom.

I started by roughing out all the illustrations, doing research as and when I needed to. I even used a monopoly house to help me draw the school from a top view perspective! 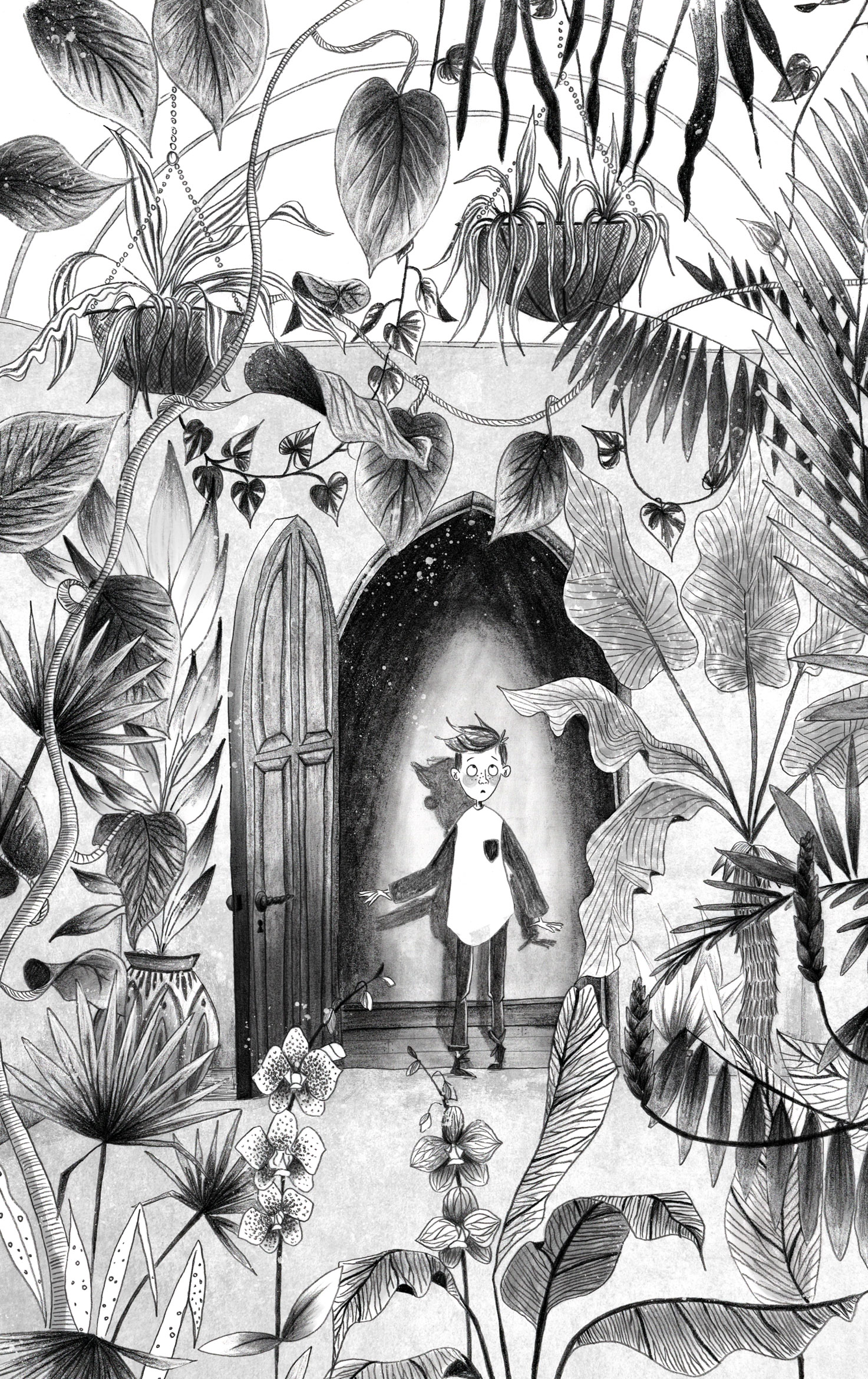 The roughs were sent for approval and then I started the finals.

Some illustrations I created as one drawing. Others, the cave and boat drawings for example, I did in layers, drawing the characters and backgrounds on separate bits of paper. I wanted some freedom to experiment with textures so I’d scan everything and then play around in Photoshop.

I used pencil, charcoal and graphite and I found it so enjoyable to be creating by hand, not on the computer. 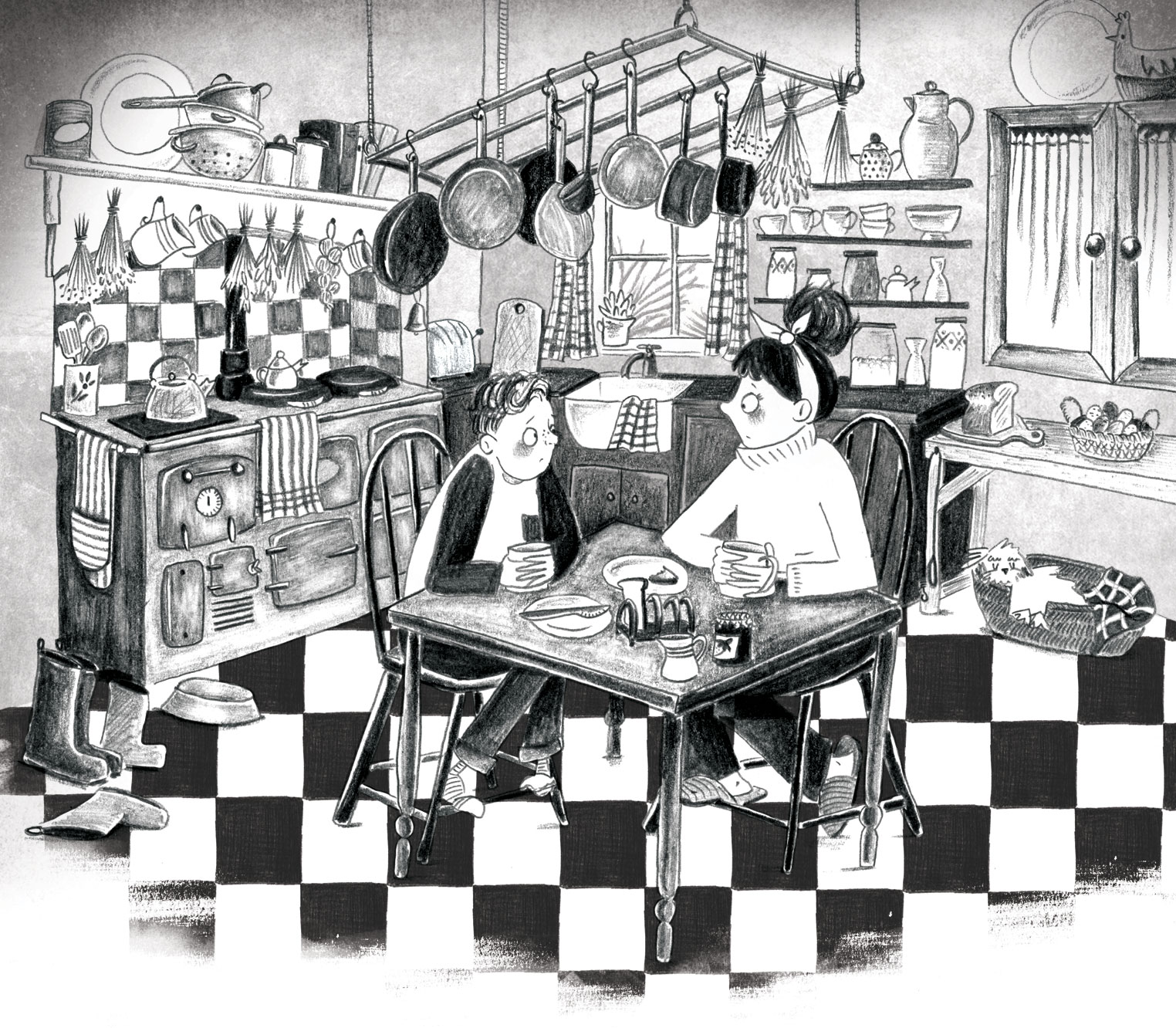 The cover was a little tricky, but they do tend to be the hardest bit. I did quite a few versions until we settled on the final idea. I wanted to colour it all dark and spooky but Bloomsbury wanted it less Gothic so we settled on a fresher, friendlier colour palette which focuses on introducing the characters. 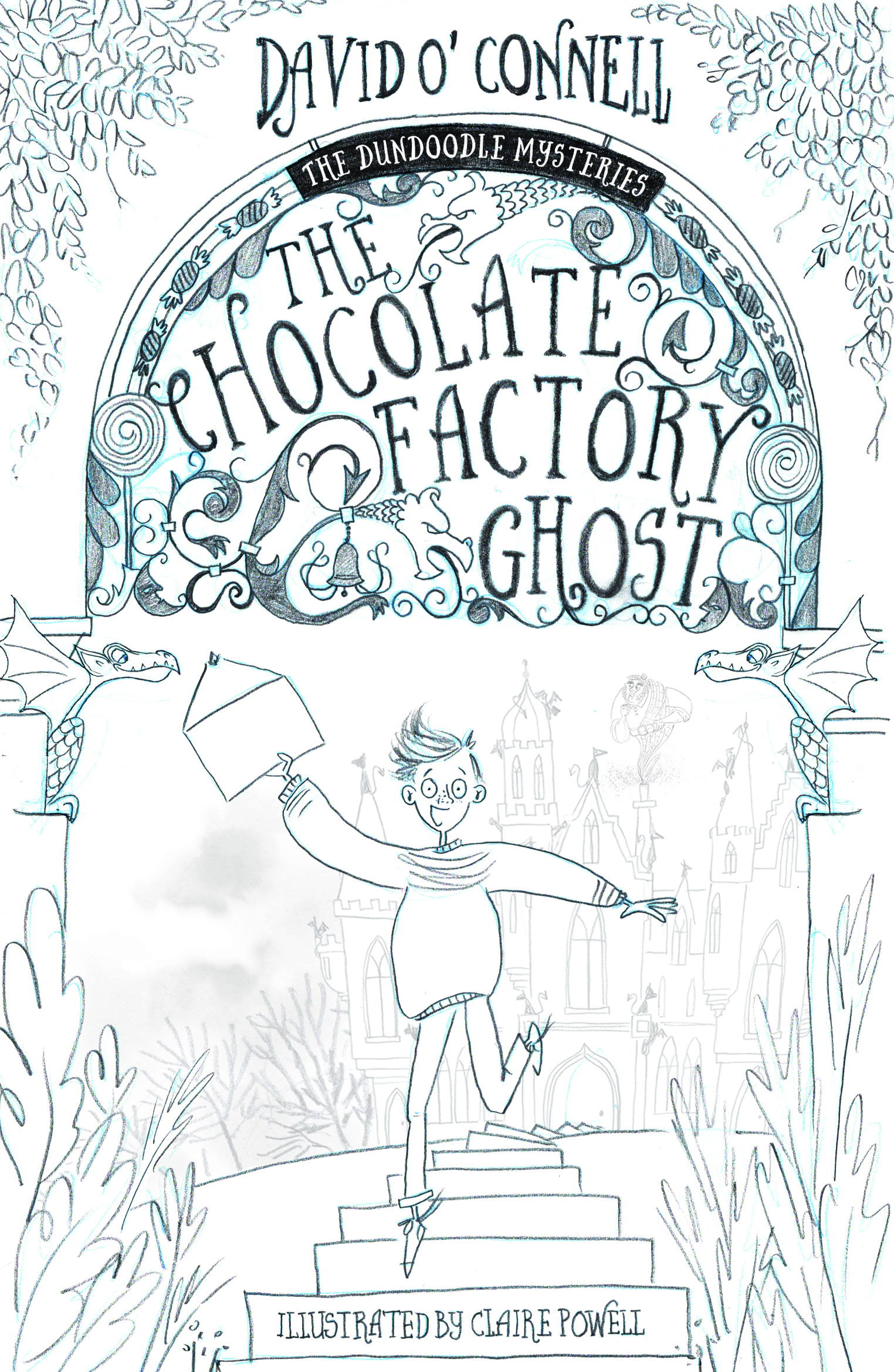 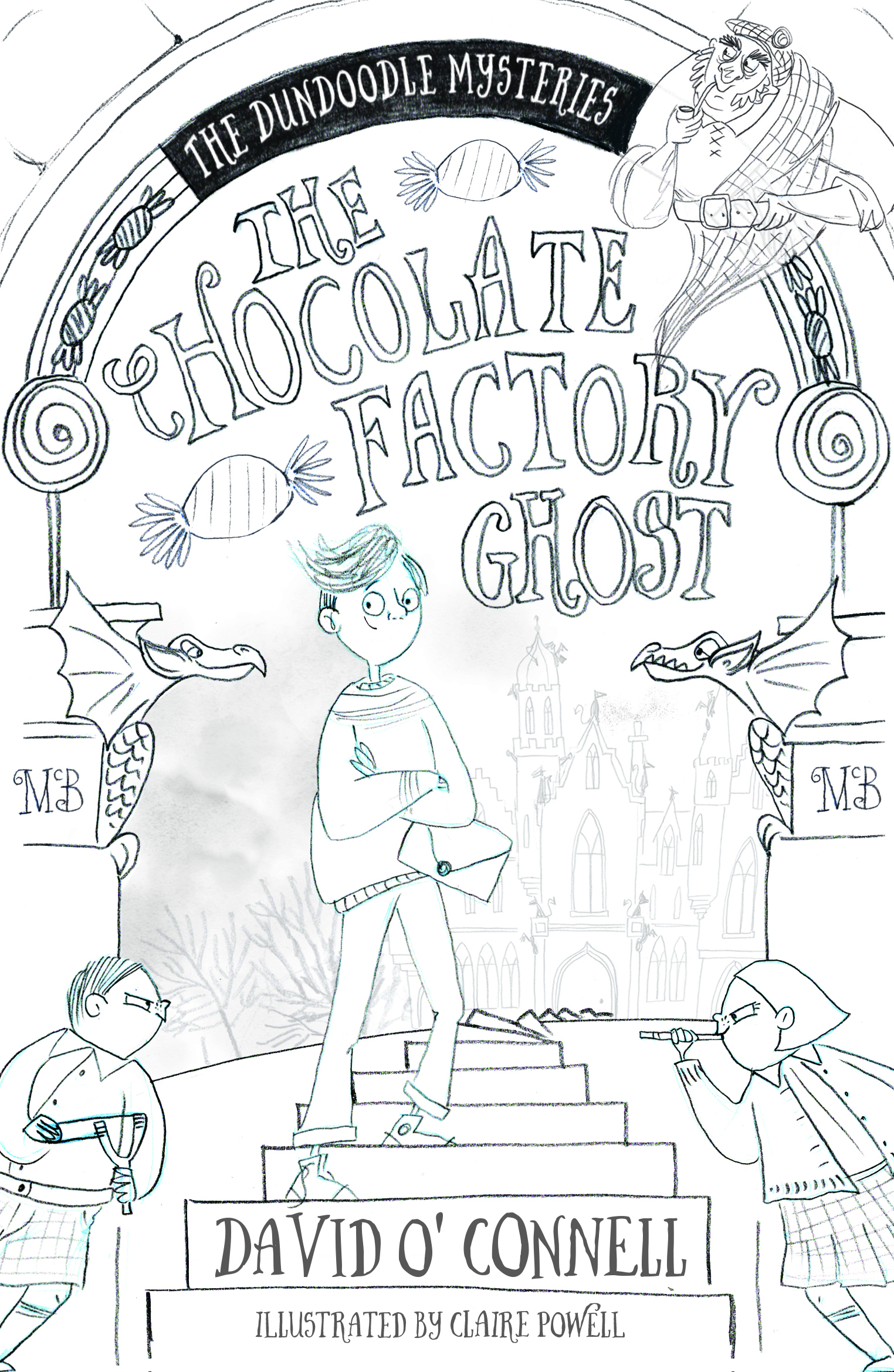 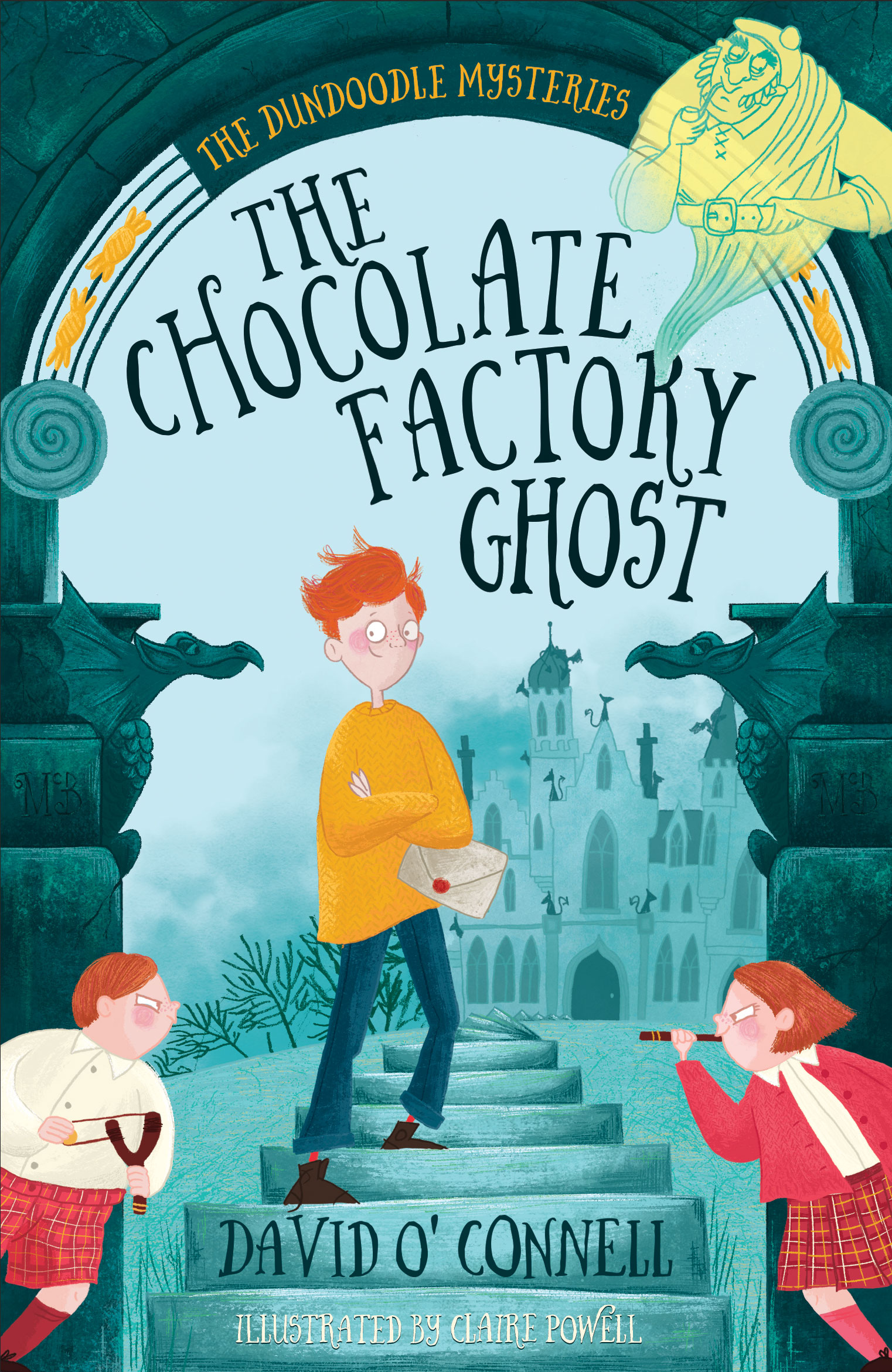 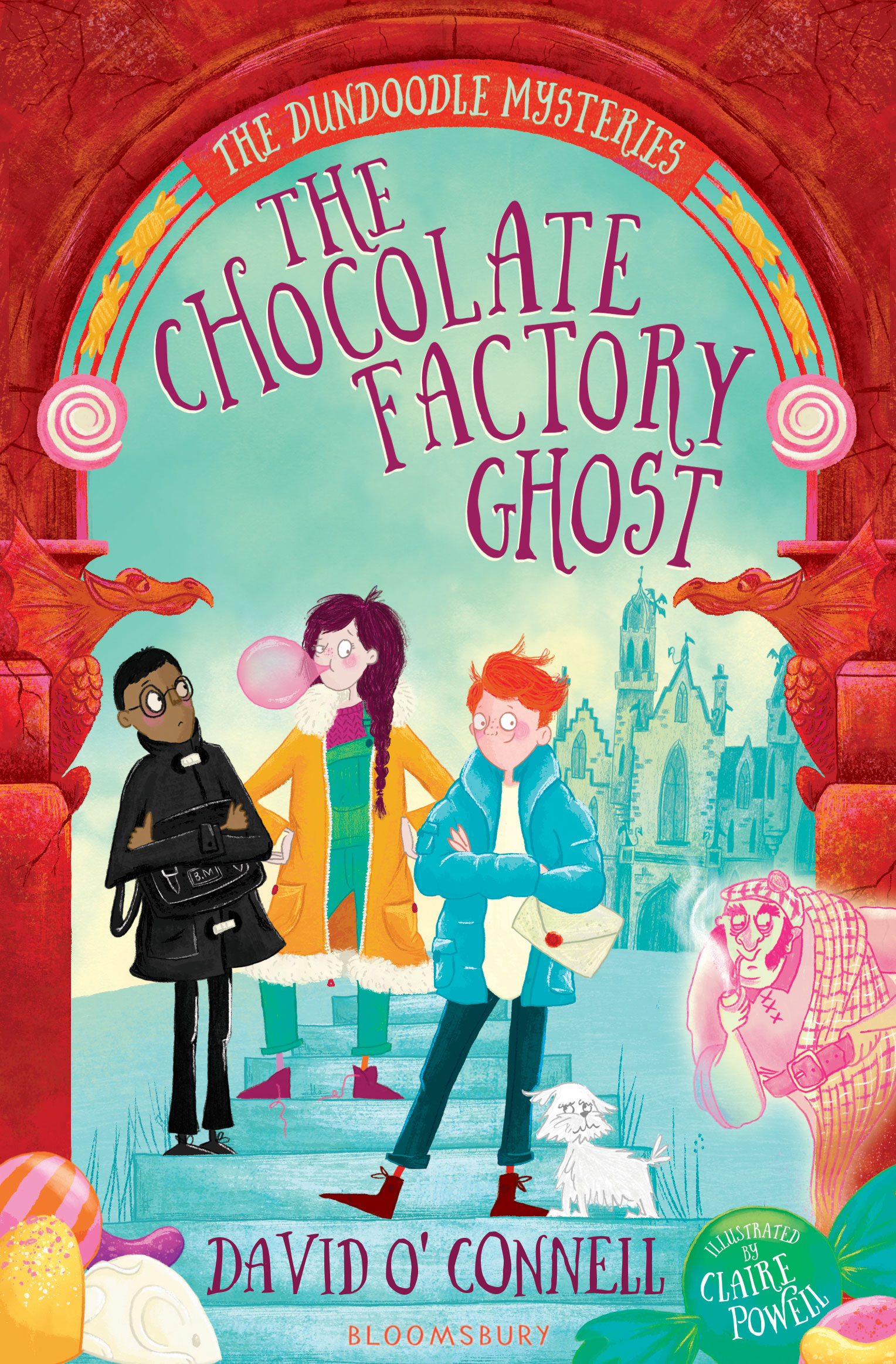 What else are you working on?

I’m working on two picture books at the moment – both top secret, of course! They’ll be finished in the summer. Then I’ll be working on CFG part deux and I’m scheduled to do another, top secret, picture book starting in October. I’m hoping I might get September off! Shock, horror! It would be nice to spend some time on my own projects, it’s hard to find time for them at the moment, though I’m not complaining. 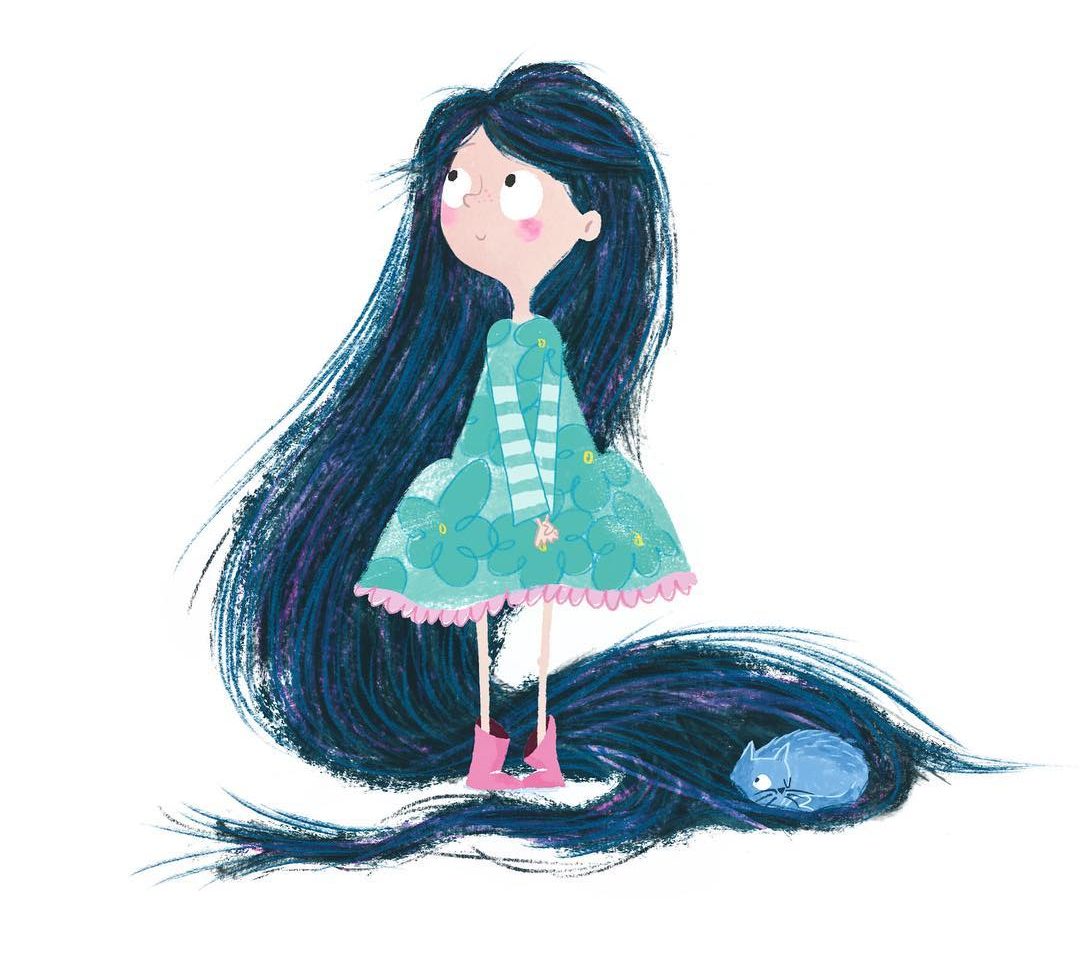