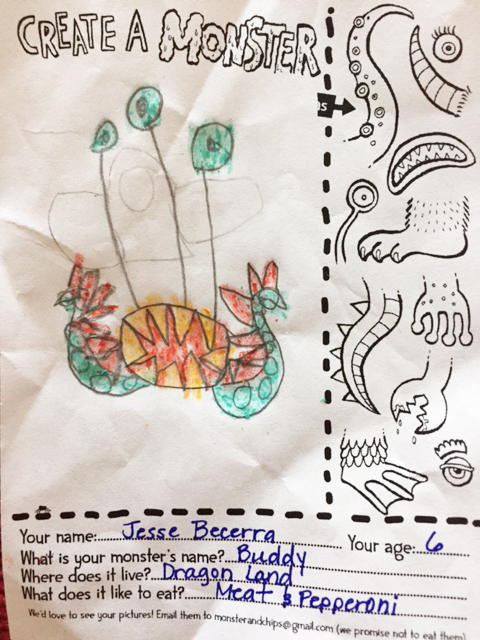 Every now and again I get sent a monster design using the activity sheets I created for Monster & Chips – you can find them here.

This brilliant monster is Buddy, created by Jesse Becerra. Buddy’s super-cool, with his tentacles and multiple eyeballs, and also has great taste in pizza. Thanks, Jesse!

Blogging is less of a chore when there are lots of nice things to write about.

Firstly, lovely letters. Here’s a drawing from Theo, aged 7, a Monster & Chips reader. He’s drawn a brilliant monster with a snot-burger and chips. Great use of colours, too. You can almost smell the fart! 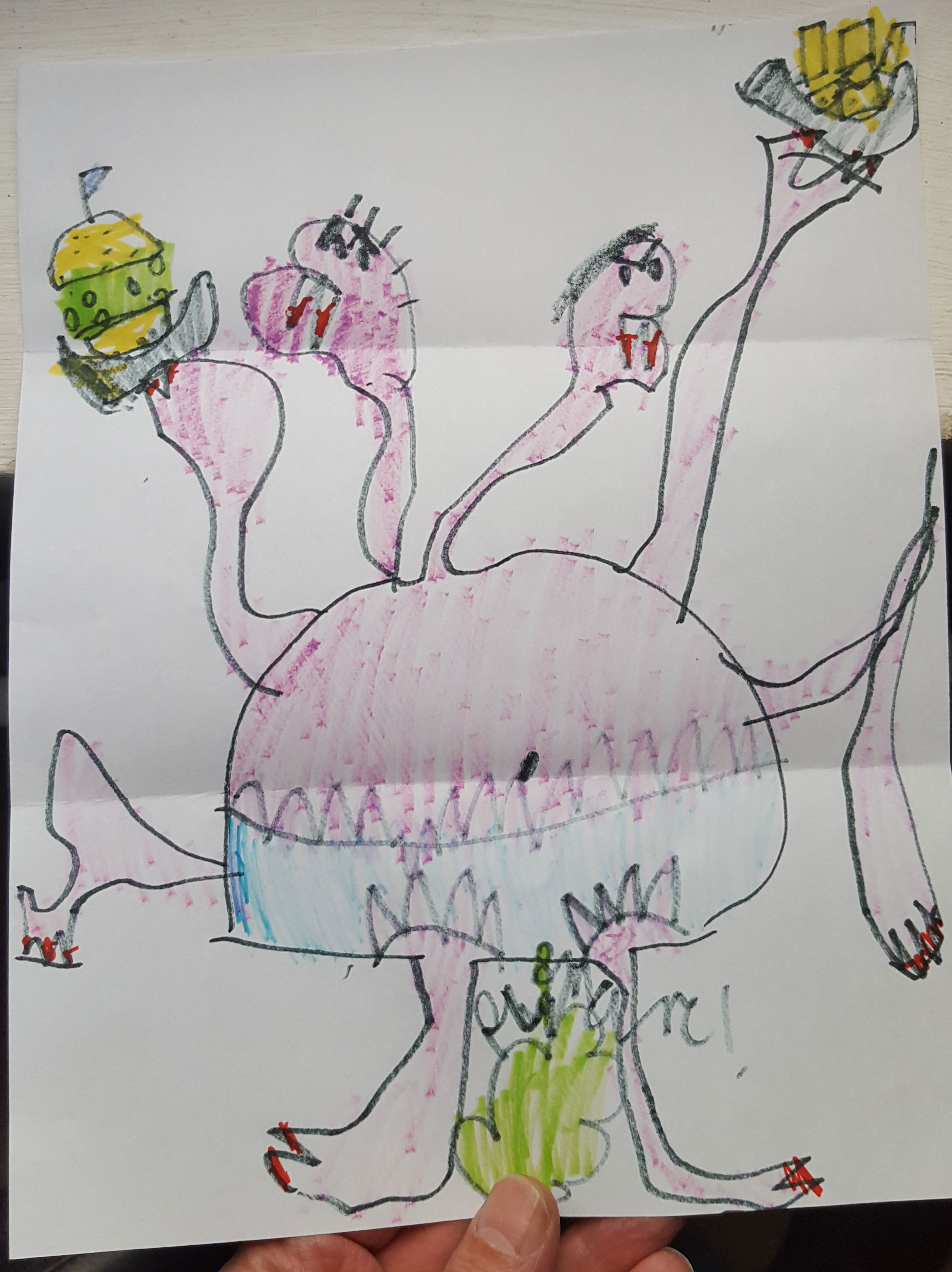 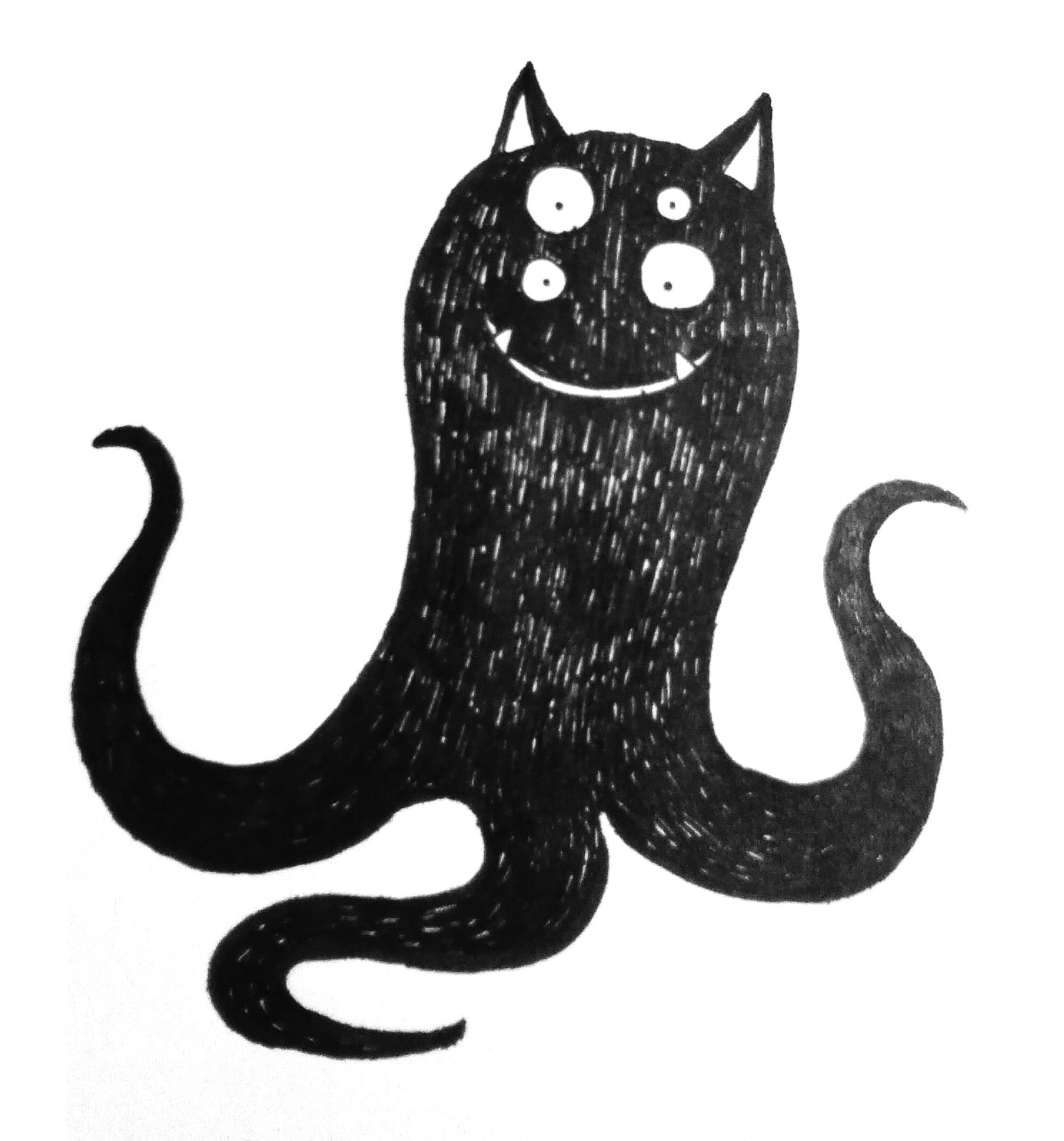 I also had a very nice letter from Charlie, which was beautifully written, so I’ve taken extra care with my reply. Charlie, from St Bede’s School in Weaverham, said the Barry the cat was his favourite character in Monster & Chips so here’s a little picture of Barry that I drew at the bottom of the letter.

Recently, I finished the illustrations for the last Creature Teacher book. It’s a great series and I was over the moon when the first book won the Heart of Hawick Children’s Book Award! Woohoo!

I couldn’t be more pleased for writer Sam Watkins as it was her first published book. And I was completely bowled over when Sam tweeted about an animated trailer that the children from the participating schools had made. It’s absolutely amazing and I keep replaying it and having a chuckle!

Freshmade NYC are a cooking and craft studio that run cookery sessions for kids in New York City. They have a storybook cooking class, which sounds like a fab idea, and recently ran a Jampires doughnut making session! Here’s a pic from their Instagram feed:

What am I up to at the moment? I’ve been doing a lot of writing lately and a few weeks back finished a manuscript for a book idea that I’m really hopeful will prove to be publisher-friendly. It’s doing the rounds of publishers right now, so I’m keeping my fingers crossed and praying to the book gods that it works out.

I’m also working on a window artwork display for the nice people at Chicken & Frog bookshop in Brentwood. I visited them a couple of years back and am doing an event for the Brentwood Children’s Literary Festival which they are organising (tickets on sale!). It’s not something I’ve done before so it’s very exciting.

In the meantime, When I’m A Monster Like You, Dad! is out in the shops very soon! My advance copies arrived from the publisher today. Illustrator Francesca Gambatesa and I are hosting a launch event at Gosh! Comics in London on the evening of May 27th – all are welcome, so do come along if you can and say hello (and buy a book!). 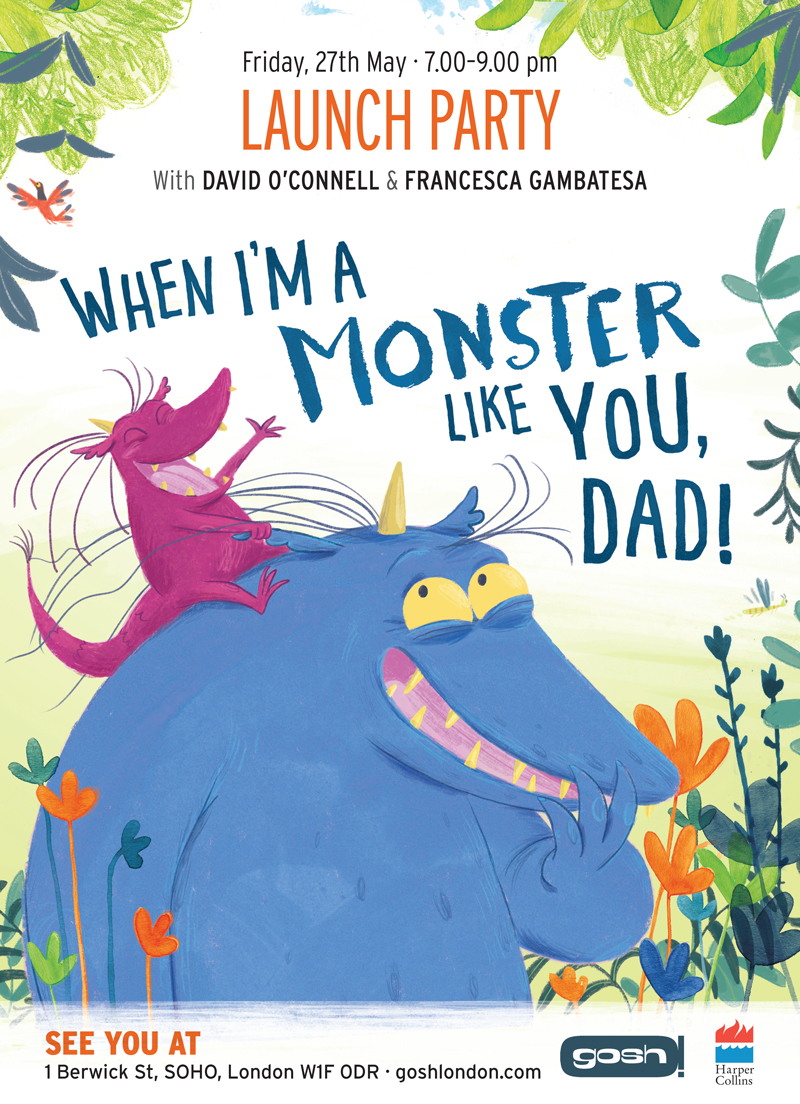 I’ve a number of activity sheets available on my website (and there are more on the websites I made for JAMPIRES with Sarah McIntyre and CREATURE TEACHER with Sam Watkins). It’s always gratifying to know that people are downloading and using them.

Madame Picque  recently emailed me from the Collège Romain Rolland of Waziers in northern France to say that she had been using my ‘Create Your Own Monster’ sheet as a way of teaching her English class physical descriptions. What a great idea!

Here are some of the results, they’re all wonderful but I think Nathan‘s monster ‘Georges’ was my favourite (see if you can spot him)! 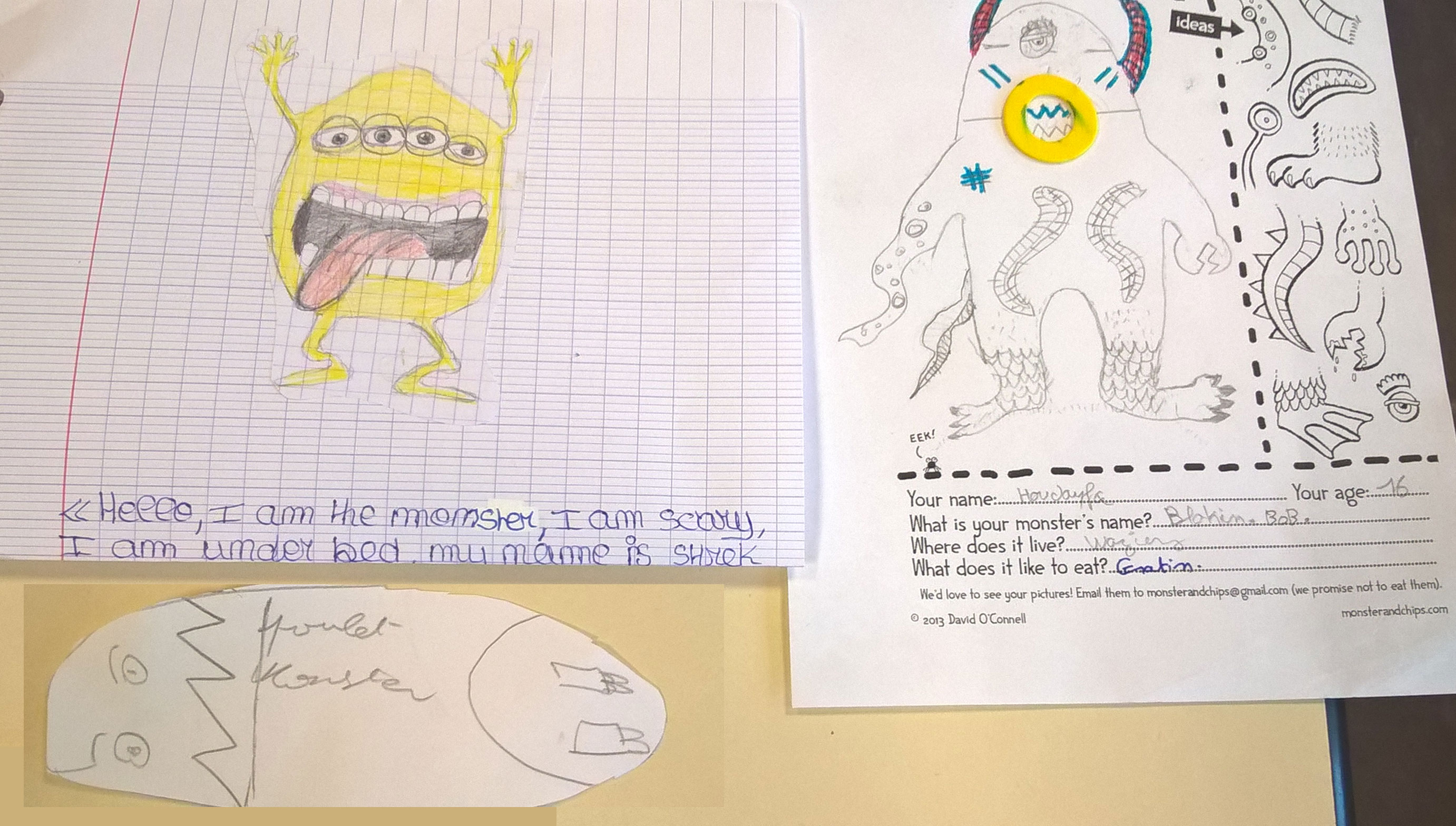 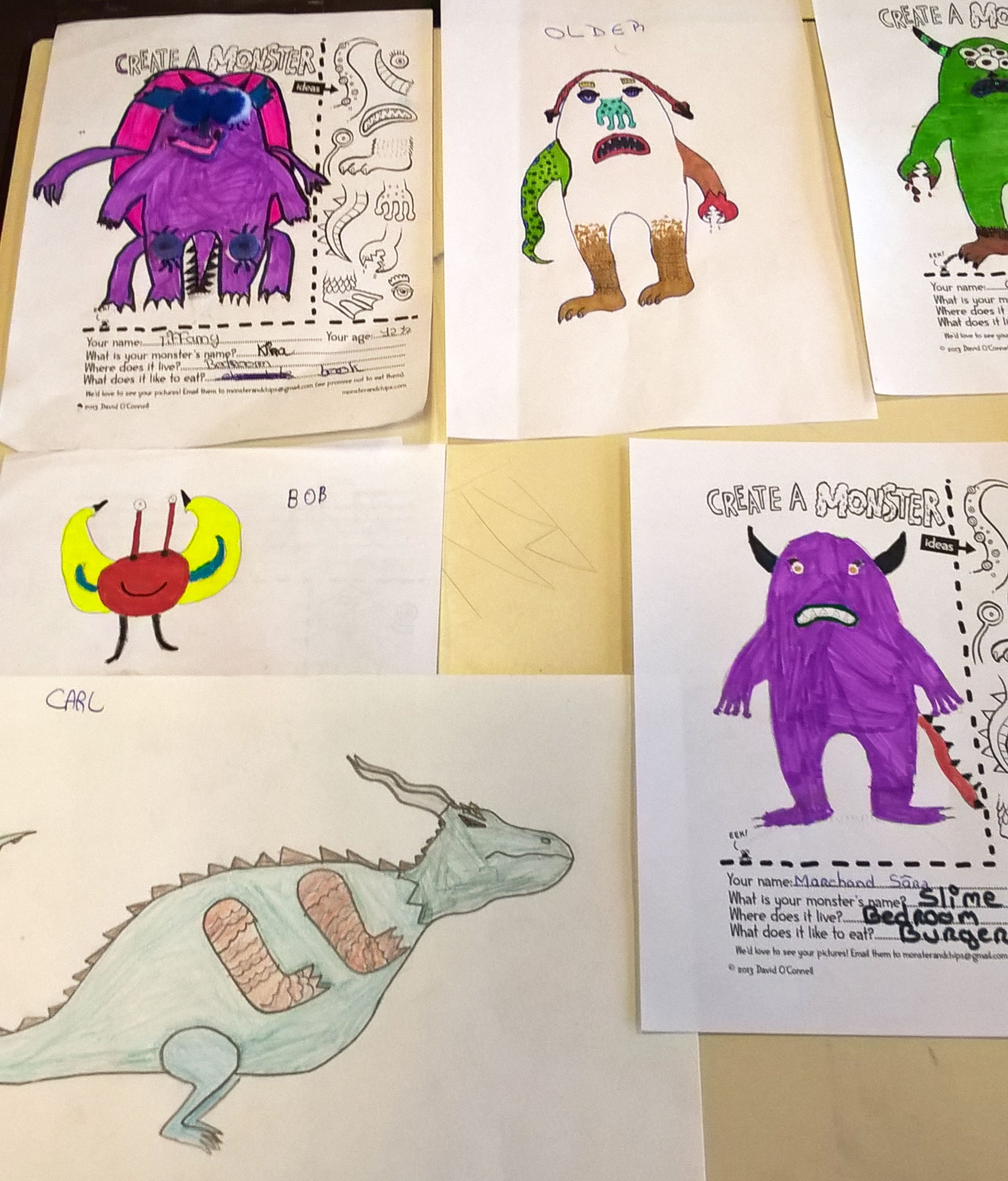 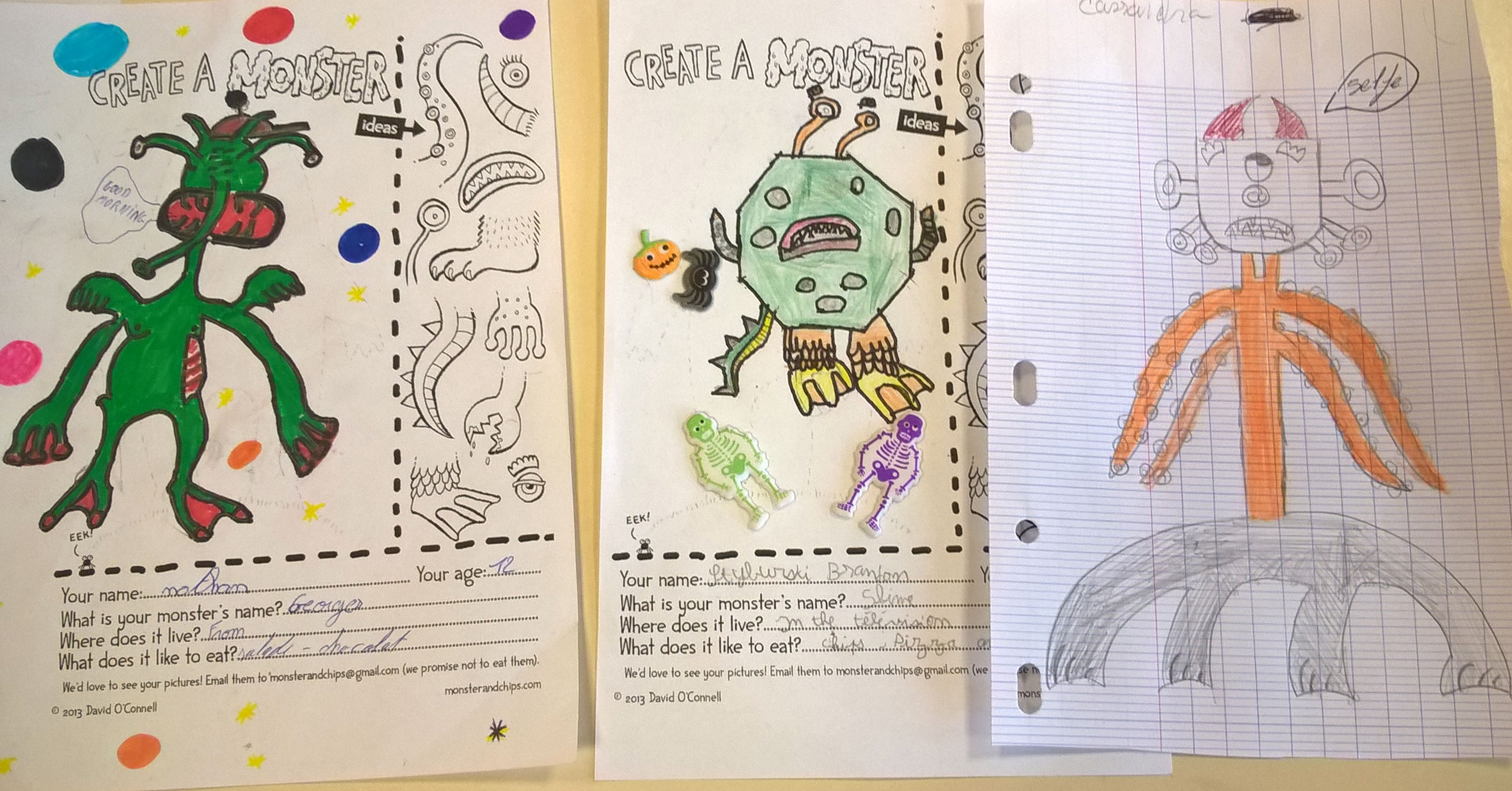 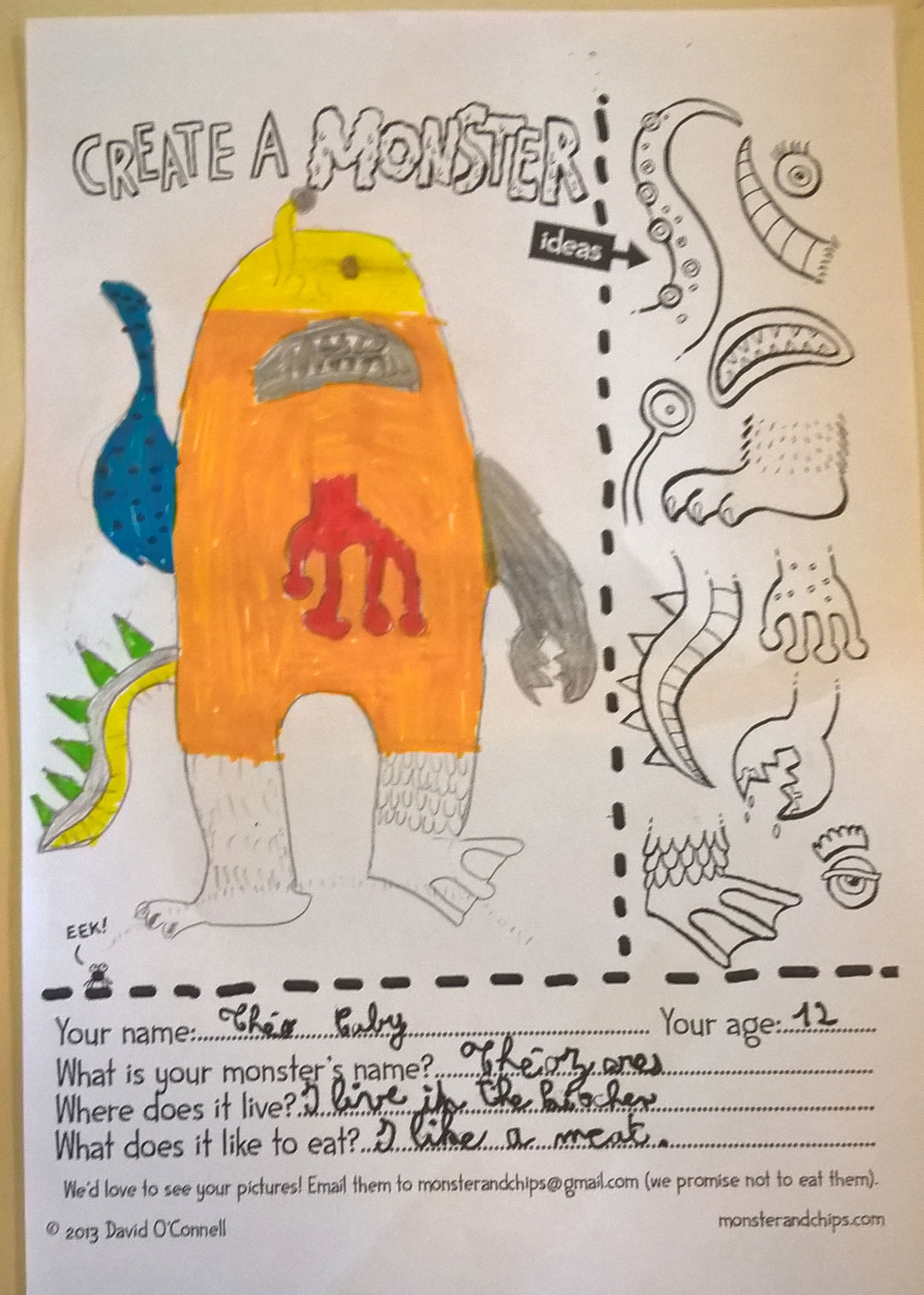 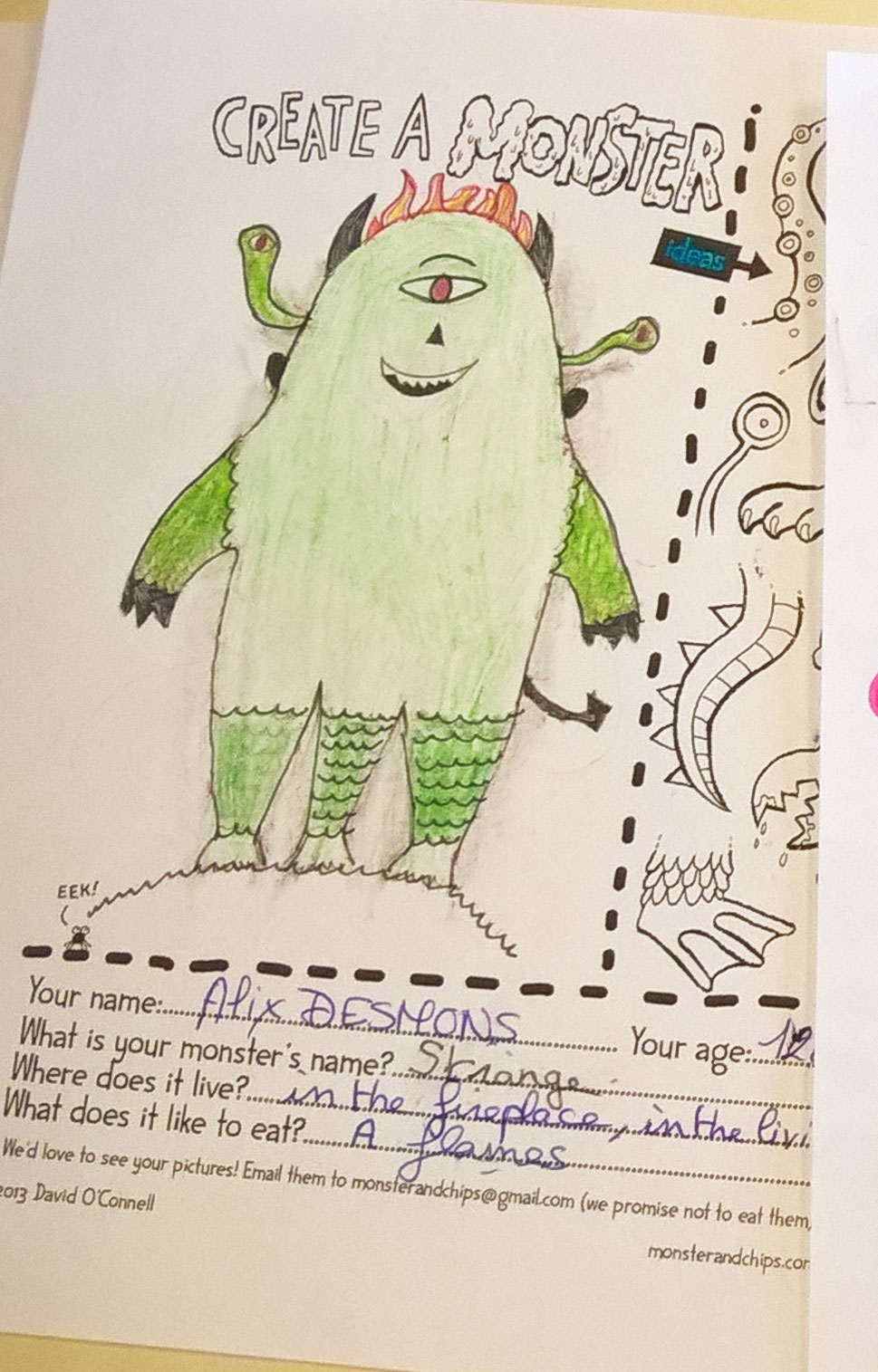 Thank you to Mme Picque for letting me know – I’m sending a drawing of my own monster to the school in return: 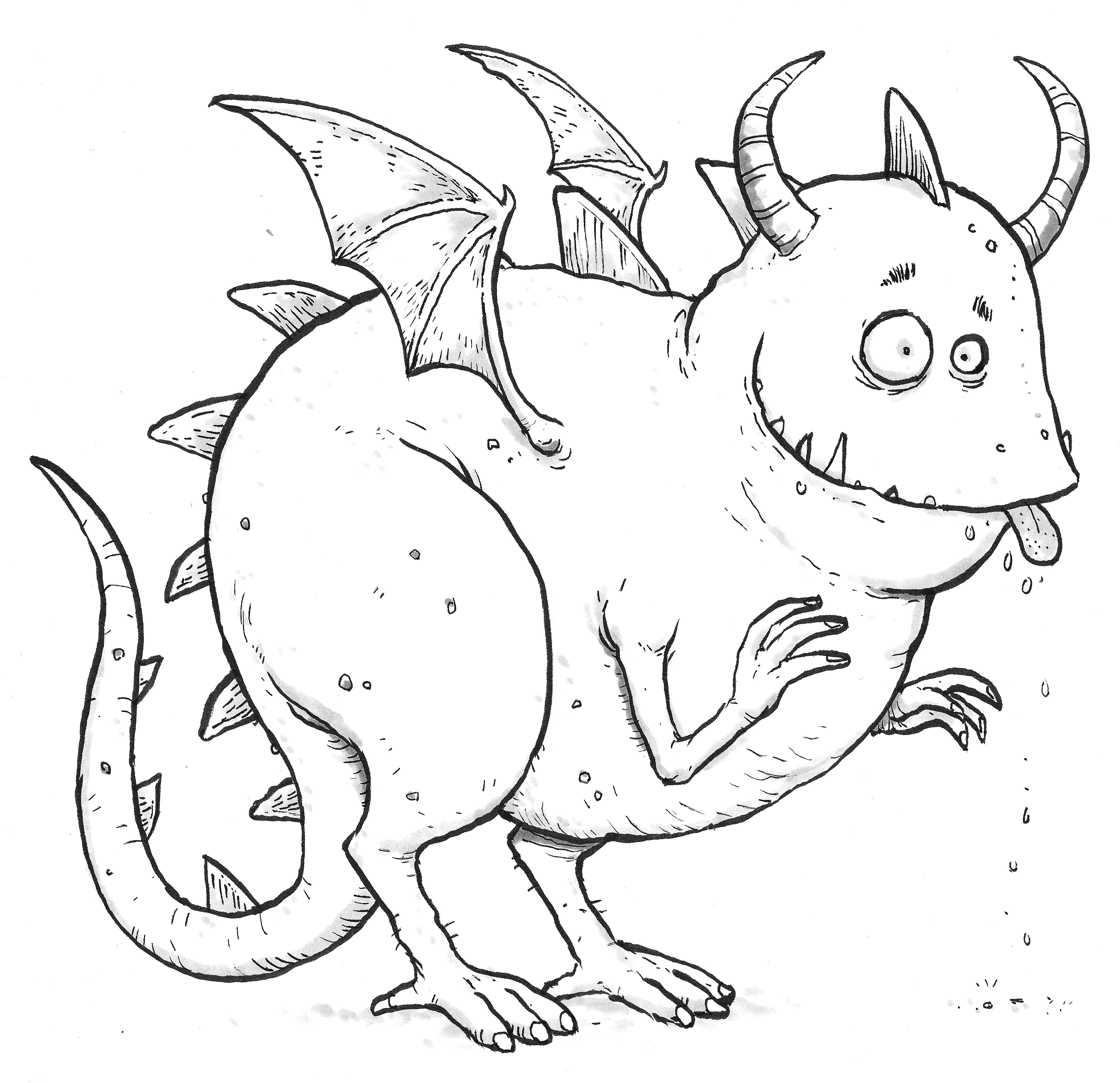