I’d almost forgotten I had a blog! So much has changed in the last seven months since my last update, mainly involving the world being turned on its head, that my own little bits of news seem unimportant. But it’s helpful for me to record things, otherwise I’m bound to forget what’s happened – and a lot of it was good, so that would be a shame.

I hope my readers have managed to get through the epidemic (at least this first wave of it) unscathed. I know a few people who have suffered from COVID-19 and it sounds absolutely horrific, with recovery almost as troublesome as the disease itself.

Lockdown has been quite productive for me despite my brain being full of worrying distractions, just like everyone else. I illustrated a couple of books and signed up for some more, and some books have appeared in shops (see below for details).

I’ve also been working on editing the text for the first book of my new series. It’s changed quite a lot – I mentioned in my last post that it’s a spin-off from my Dundoodle Mysteries series but I’m playing down that idea as it’s become much more of its own beast, and I’m looking forward to seeing what people think of it. I’ve seen some artwork by the illustrator and have been blown away by how he draws the world I’ve created in words. It’s very exciting and I’ll share more information when I can.

Here are some of the happenings since the beginning of the year. 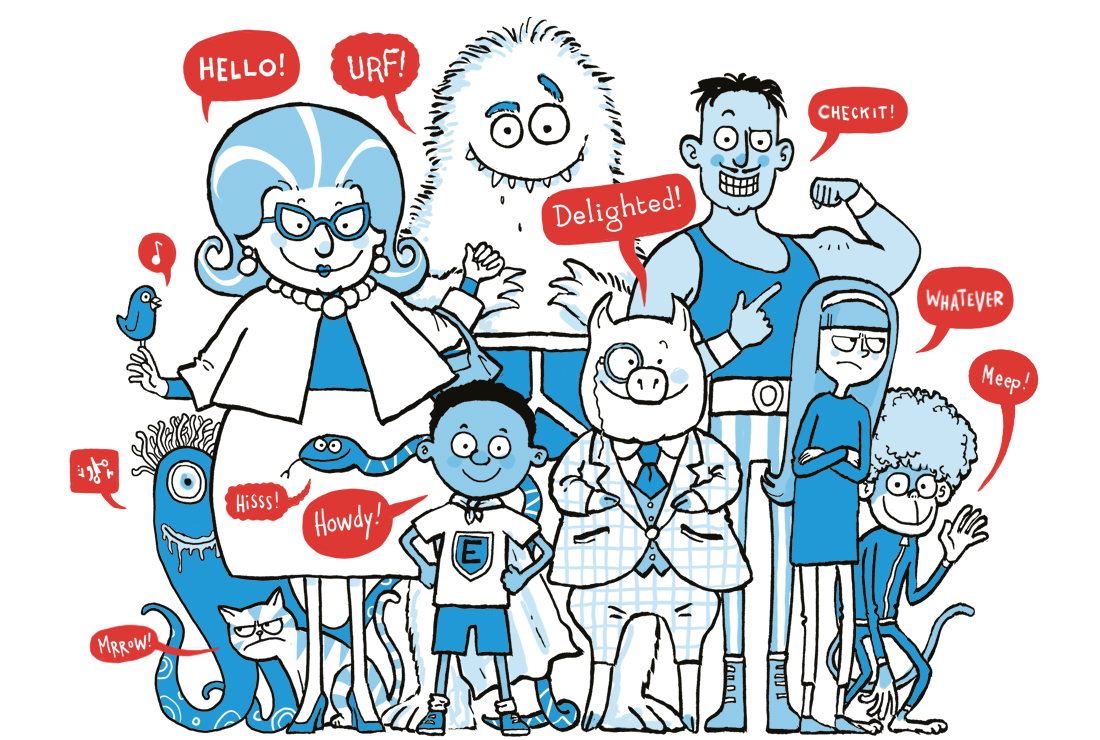 January: I spent some time updating my portfolio with some new art. Above is a favourite pic, which is on my welcome page, and you can see the rest here. I think it’s time I gave my website a major overhaul, although I probably won’t get time to do that until Christmas! 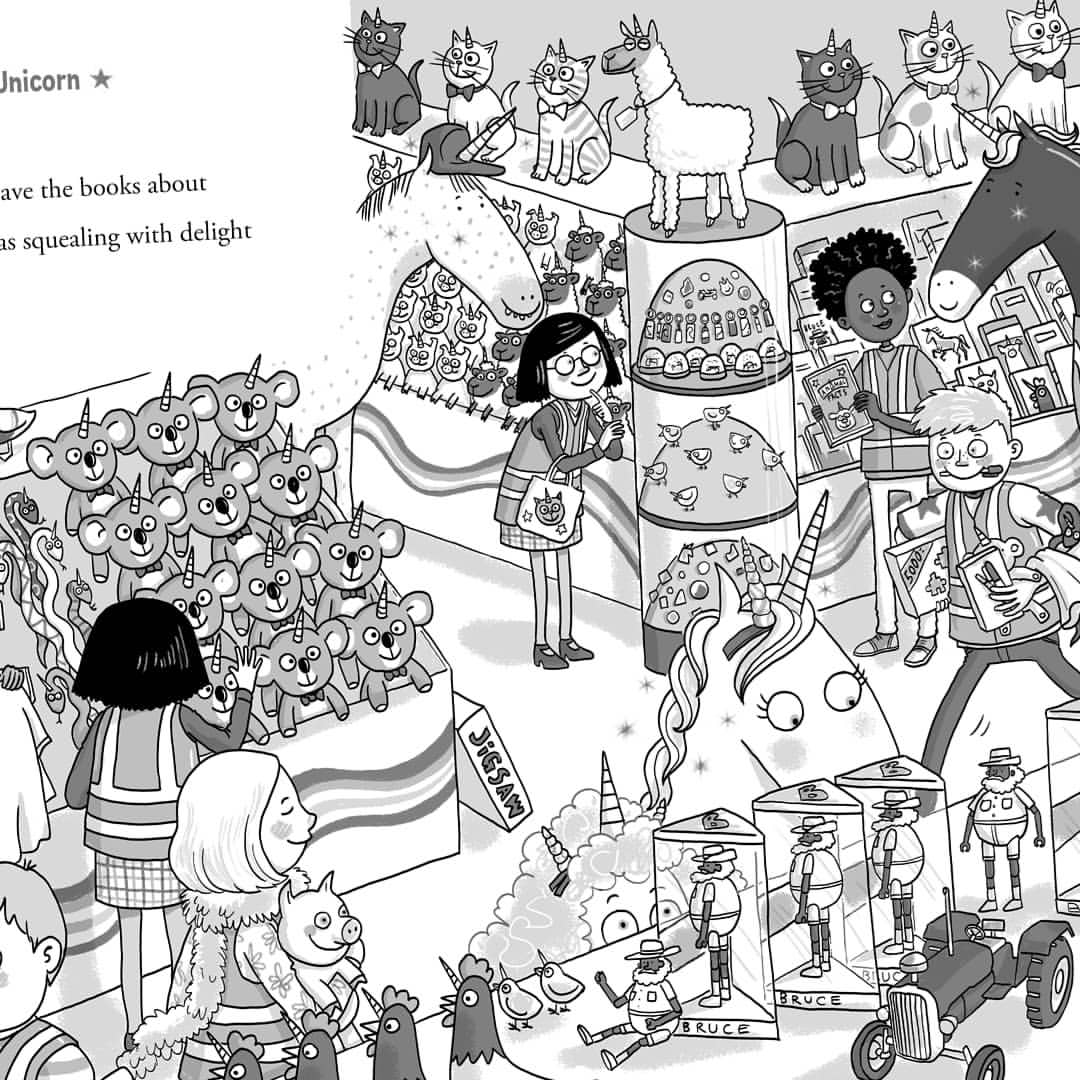 The book came out on World Book Day, when children are encouraged to go to school dressed as their favourite book characters. I was thrilled to see a few Naughty Unicorns dotted around social media. Here’s my favourite: 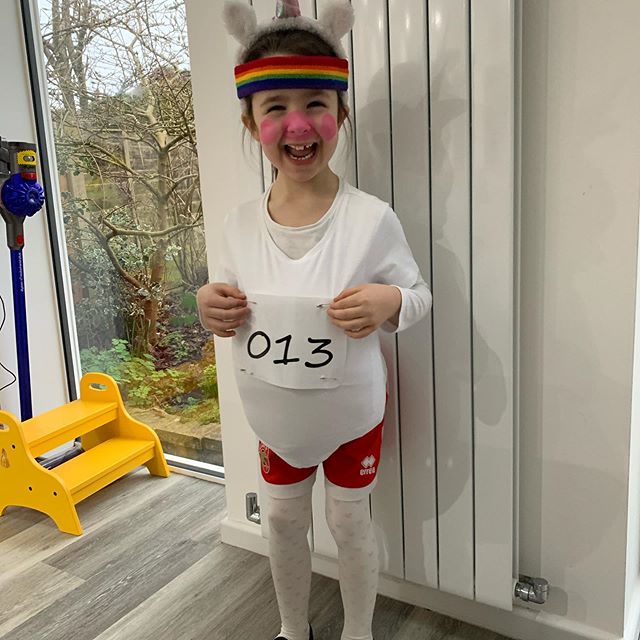 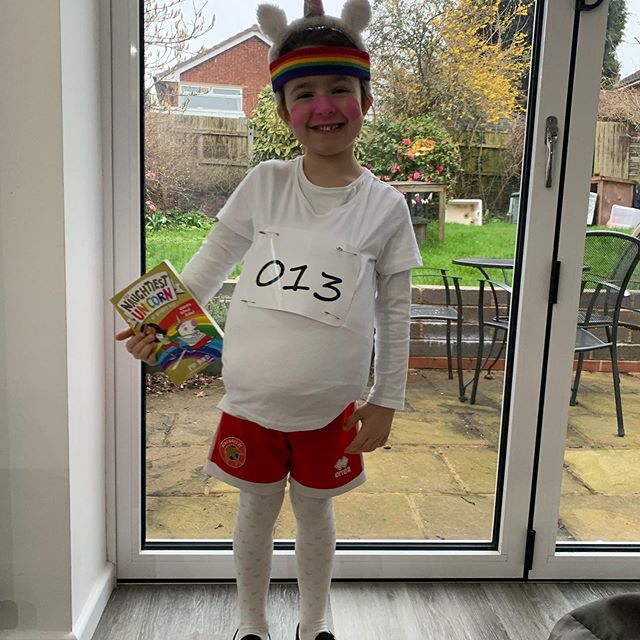 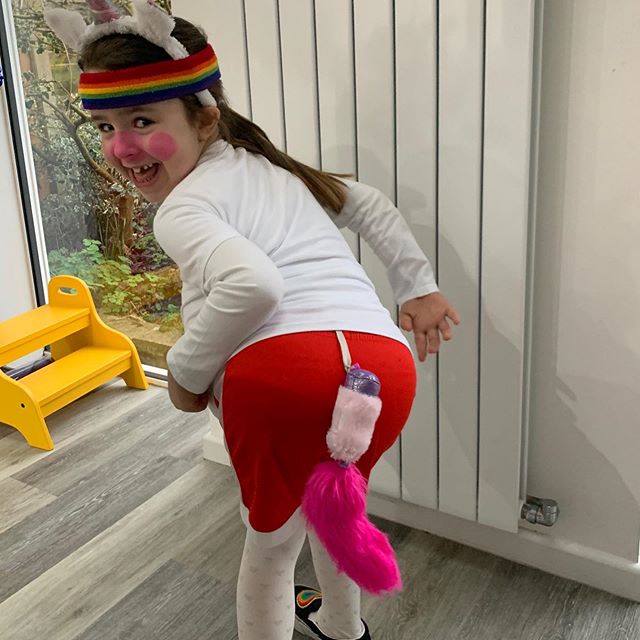 Hilarious! She’s dressed as Dave the Unicorn in his sports kit and looks like she’s loving every second.

Here’s a tweet from Blake Harrison, the actor best known from the TV comedy The Inbetweeners:

My daughter went to school today dressed as Dave The Naughtiest Unicorn. Basically a unicorn who farts and poos at inappropriate moments. I couldn’t be prouder. Love my little legend so much ❤️ #WorldBookDay
Also she’s a method actor so the teachers are in for a tough day.

Archie McBudge from The Chocolate Factory Ghost didn’t miss out:

Lockdown came into force in the UK in the middle of March. I was very pleased to discover my book activities were being put to good use by home schoolers. You can find all my activities, including ideas for drawing, making comics and creating stories, as well as colouring-in sheets, puzzles and teaching resources here. 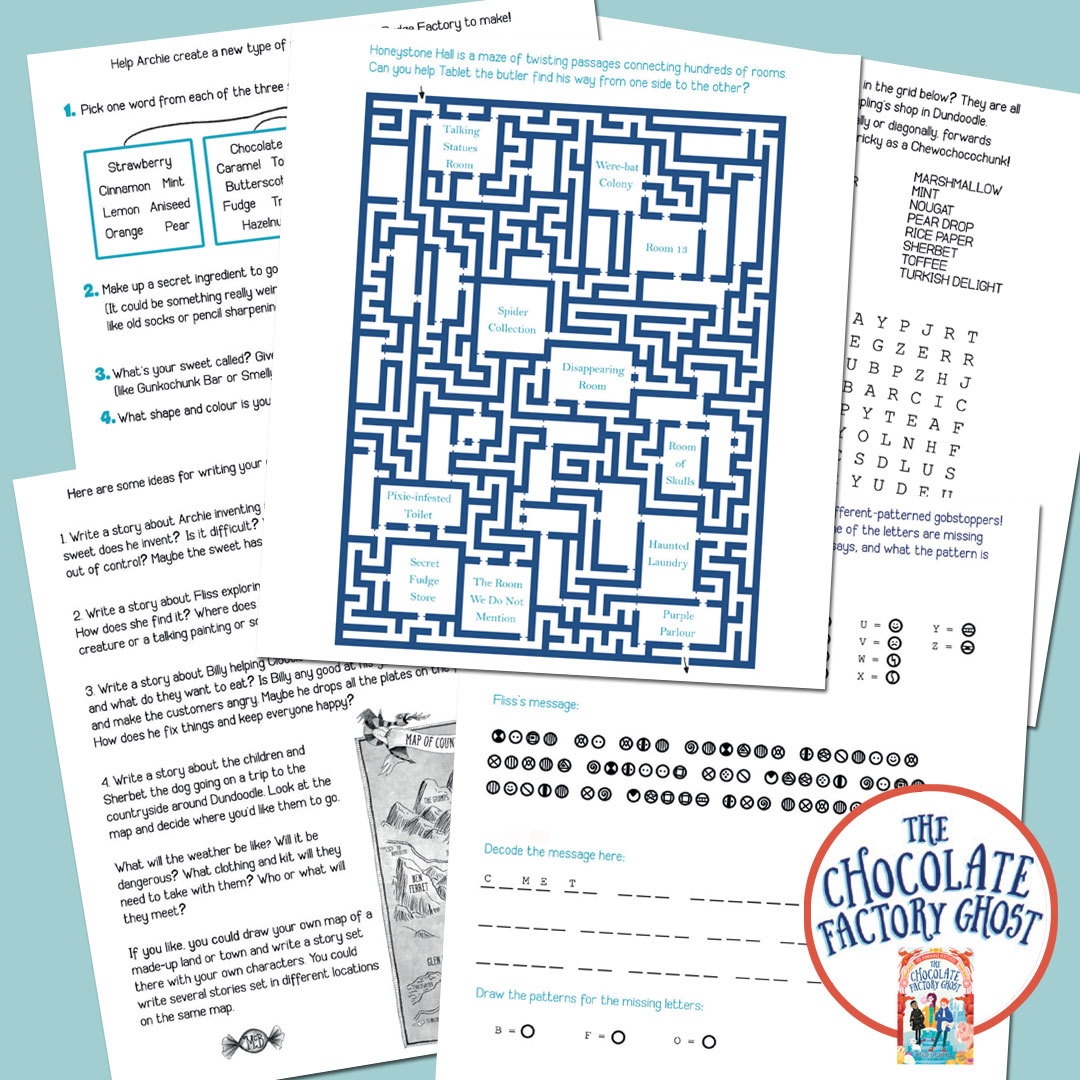 Finley Epps let me know he’s been inspired by my Dundoodle books. I love to see readers’ art:

@davidoconnell hi David o’Connell! I have made a book of wyrdiness and drawn a pookiecrag castle! Do you like them?! 😁 From Finley Epps pic.twitter.com/sBlMLMLzTl

April: The last of the Dundoodle Mysteries arrived in shops! Unfortunately none of them were open, and even Amazon weren’t prioritising book deliveries. (By the way, please don’t use Amazon for buying books – they demand huge discounts from book publishers, so that the only people who make money from sales are Amazon. Use your local bookshop if you’re lucky enough have one, or order online from Waterstones and other proper booksellers. There are links on all my book pages.) 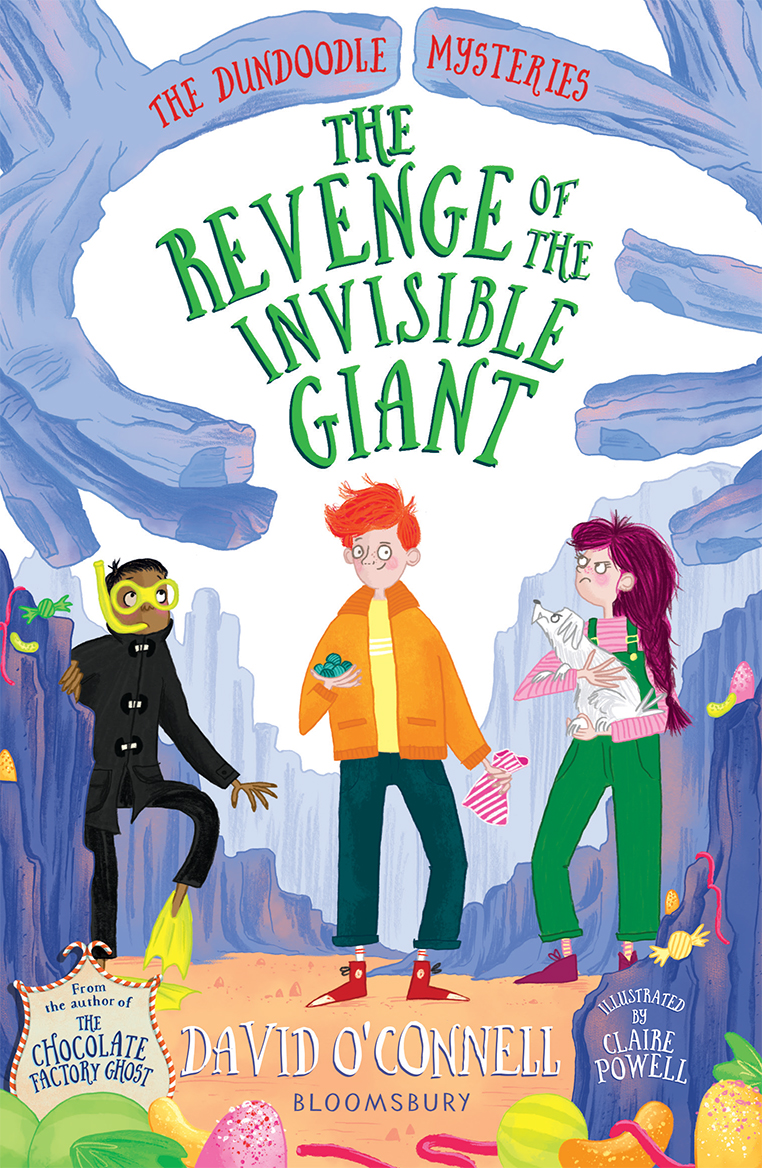 Having a book come out during lockdown was rough, but at least The Revenge of the Invisible Giant was the last book in the series and not the first, and sales picked up as shops began to open up. This was great fun to write, and I think I’ve given Archie and friends a decent send-off. Claire Powell brings the whole thing to life, as usual, with her brilliant illustrations. 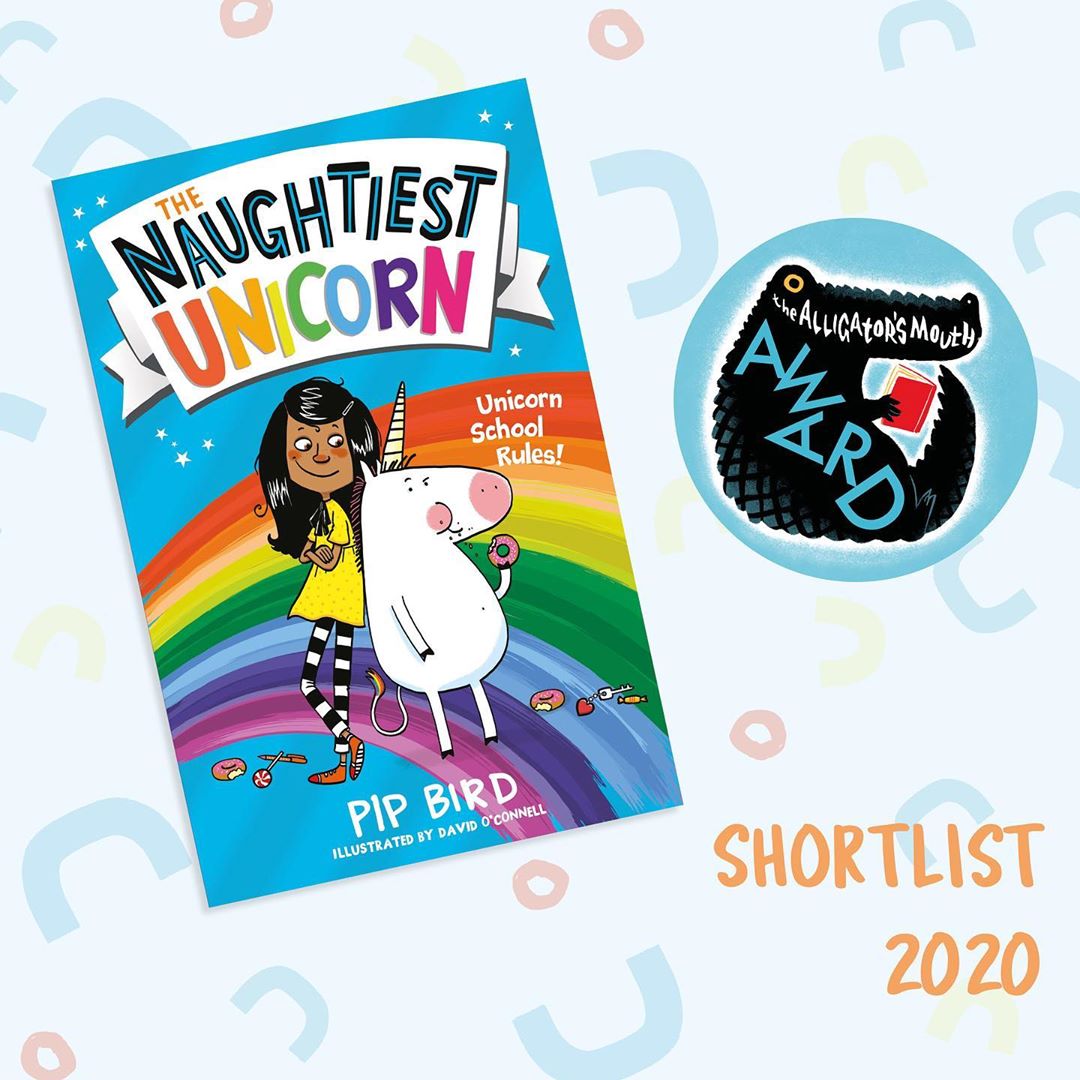 The Naughtiest Unicorn was shortlisted for the Alligator’s Mouth Award, a prize that recognises illustrated children’s fiction. We didn’t win, but it’s always lovely to see a book appreciated in that way, and see so many friends on the shortlist too. 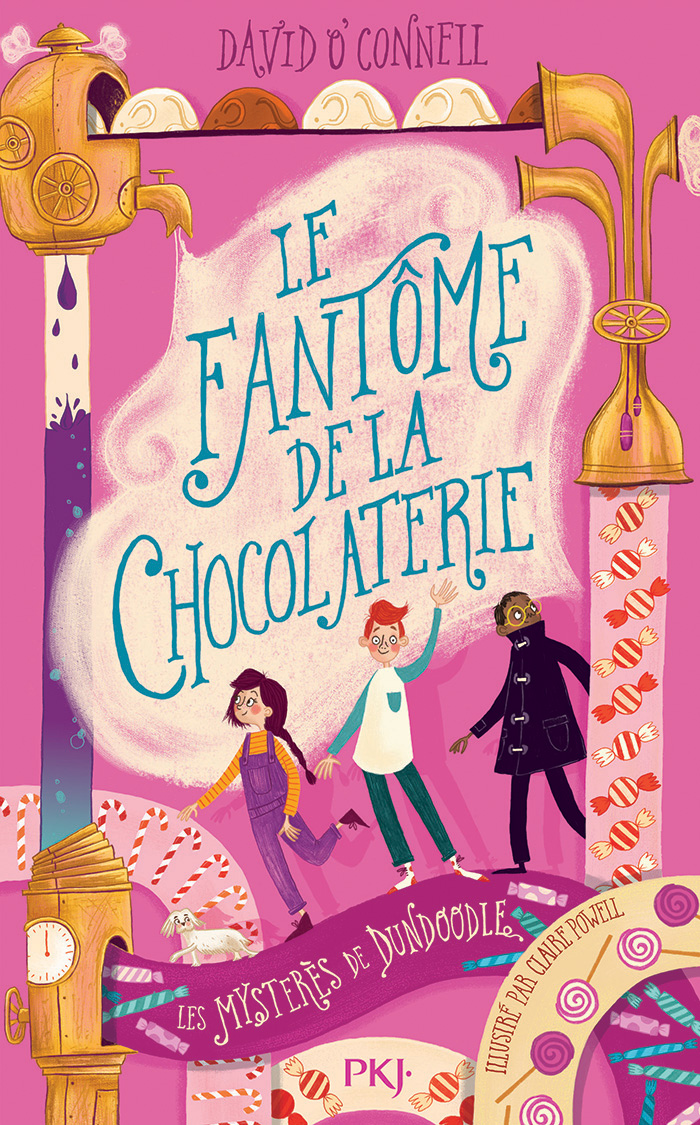 June: The French edition of The Chocolate Factory Ghost came out, after my French publisher (PKJ) decided to delay release from April. I was particularly pleased to see this, as Claire Powell had created a brand new cover for the book, at PKJ’s request. European publishers are far more daring with there covers than UK publishers, and Le Fantôme de la Chocolaterie is a glorious pink.  There was even a matching trailer:

Also out in June was a piece of educational illustration I do from time to time if my schedule allows. This job was to illustrate a set of cards that teachers and parents can use to discuss and explore character strengths with children, enabling them to learn, recognise and express all sides of their character. It’s great to have a bit of variety in work projects and these types of projects are particularly interesting. Here are some snaps: 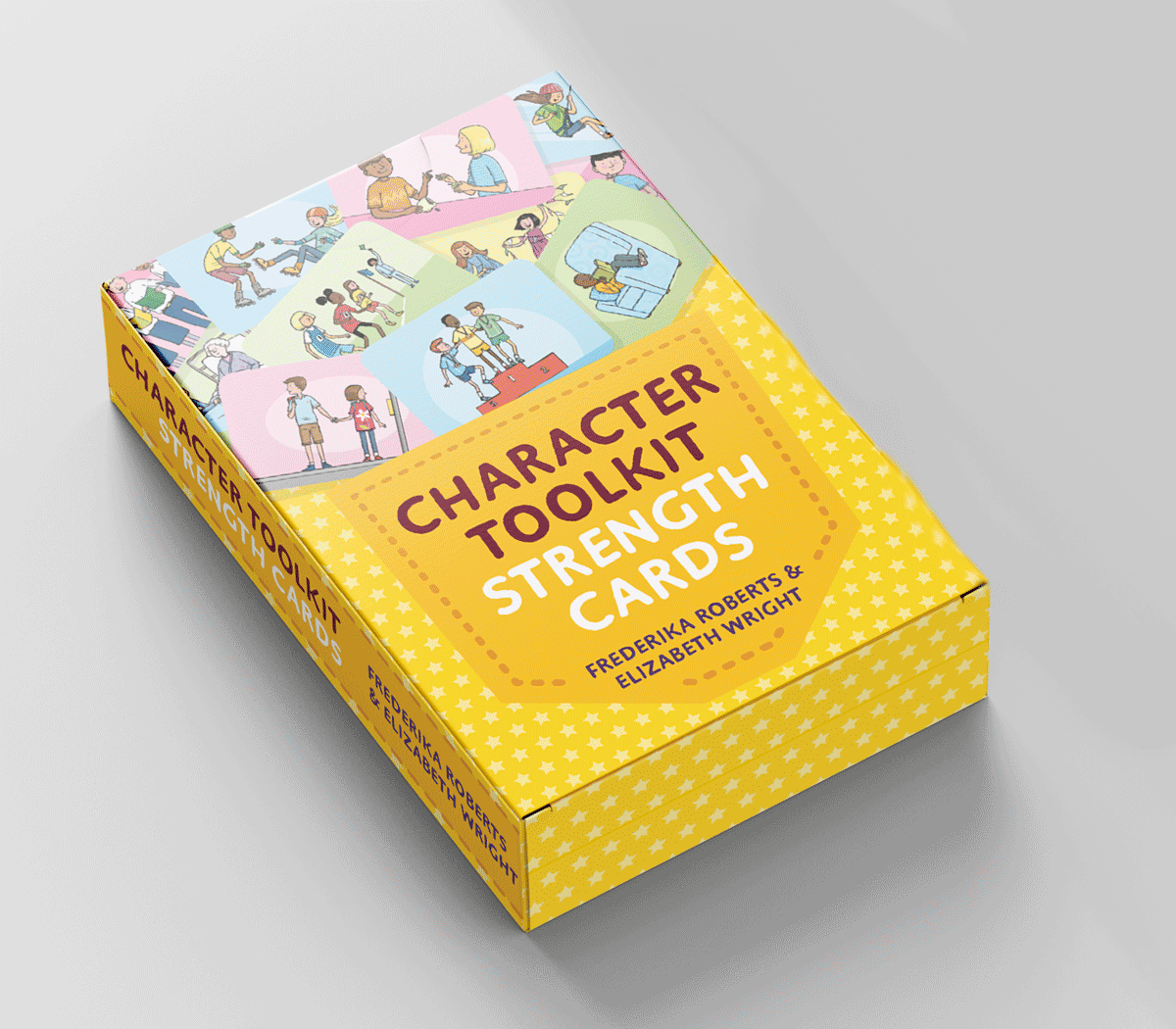 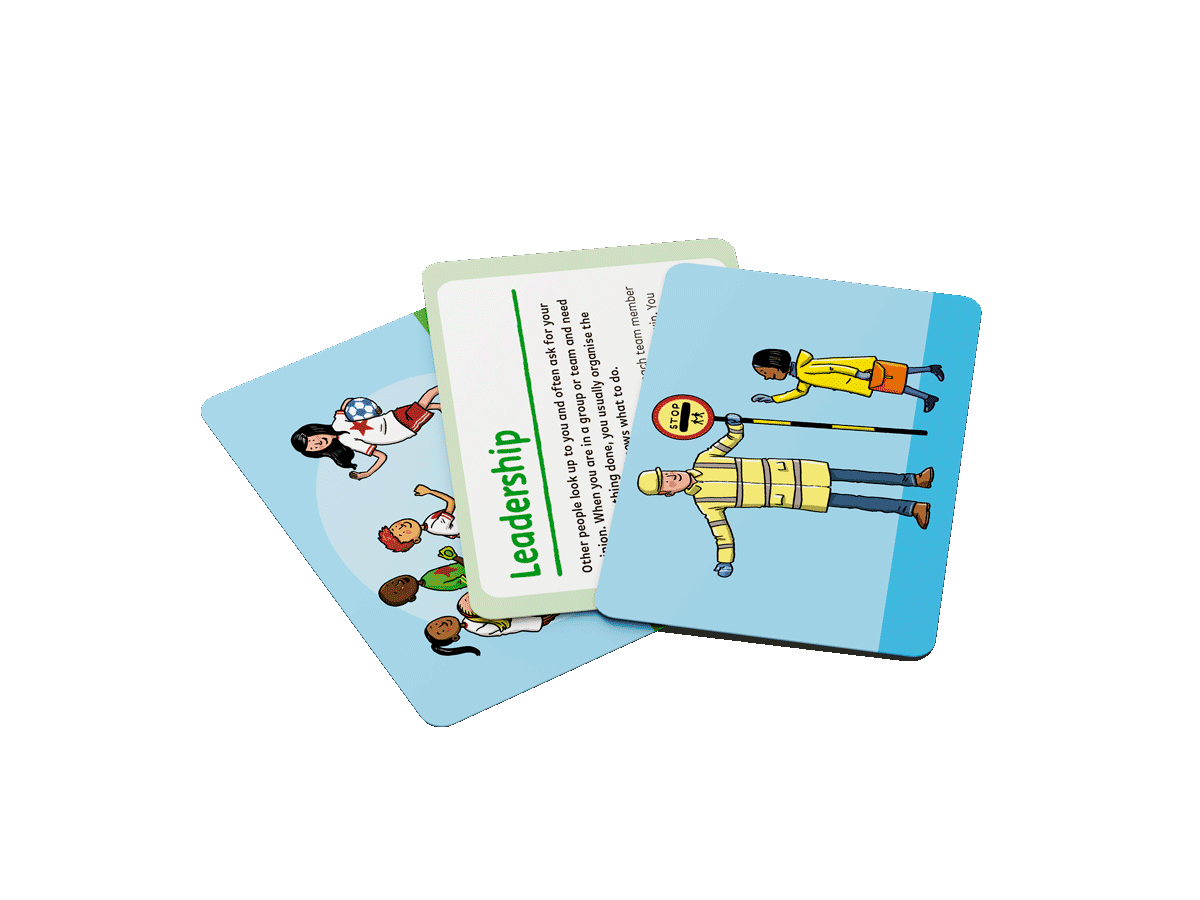 Speaking of variety, there was an announcement in The Bookseller about another project that I’m working on right now, a book written by TV doctor Ranj Singh (also known from his appearance on Strictly Come Dancing in 2018). The book itself hasn’t been properly announced yet, but it’s due out in February next year. 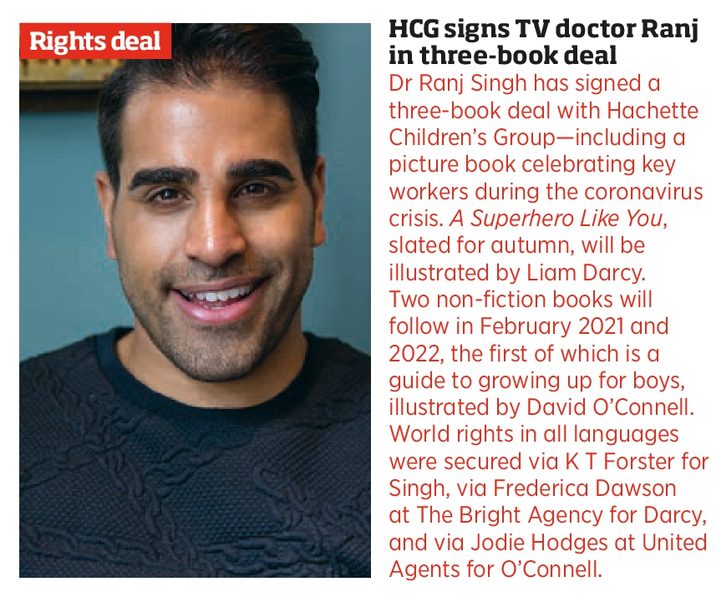 July: Coming right up to date, the sixth of the Naughtiest Unicorn books – The Naughtiest Unicorn on the Beach – has just been released, perfectly timed for some holiday reading. Mira is dreaming of pirate treasure but Dave’s mind is fixed on lazing in the sun with his chips, if only the seagulls will leave him alone! 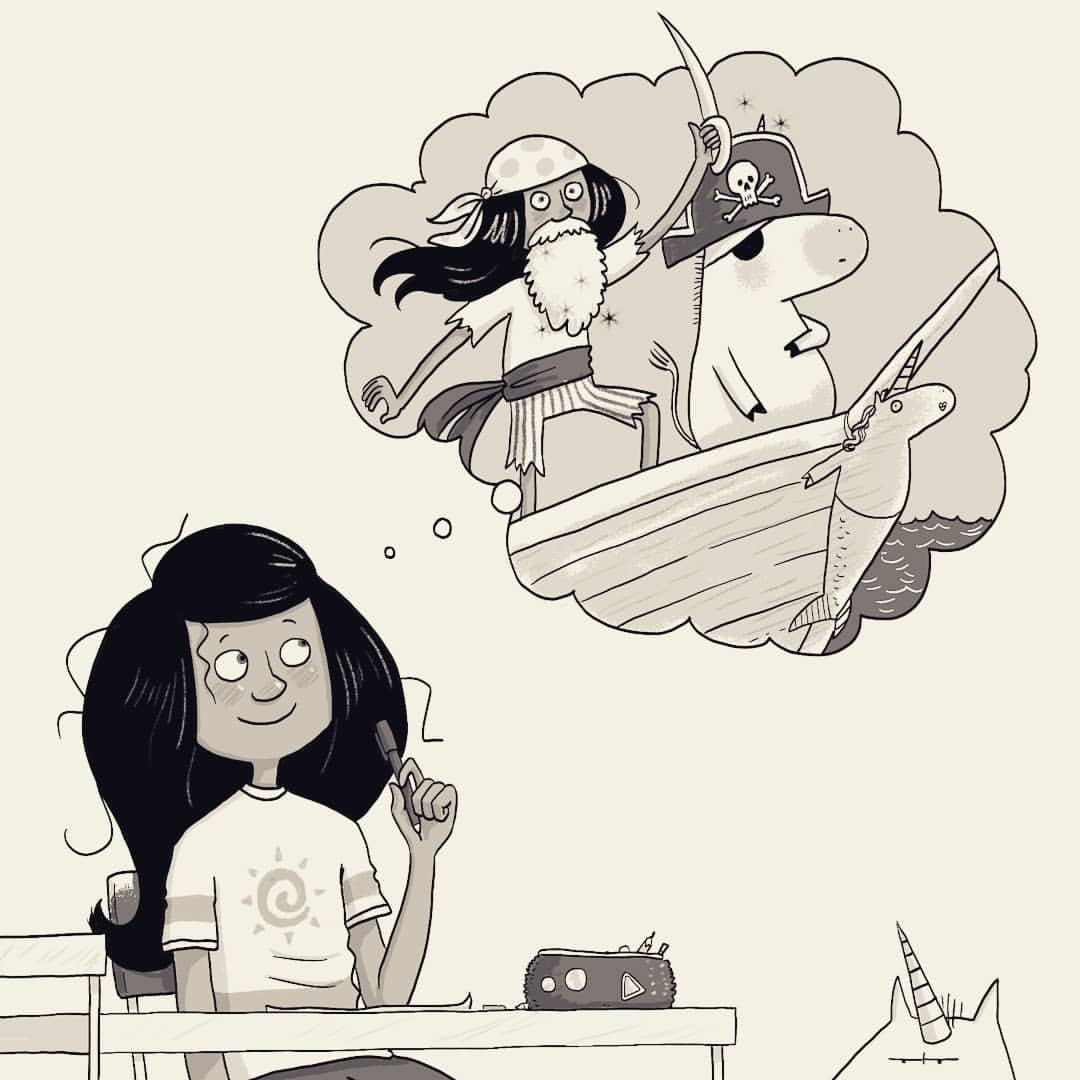 The series has been so popular that publisher Egmont have commissioned two more books beyond the planned seven, so I’ll be busy with Dave and friends well into next year!

I hope everyone has a wonderful summer and stays safe and healthy!