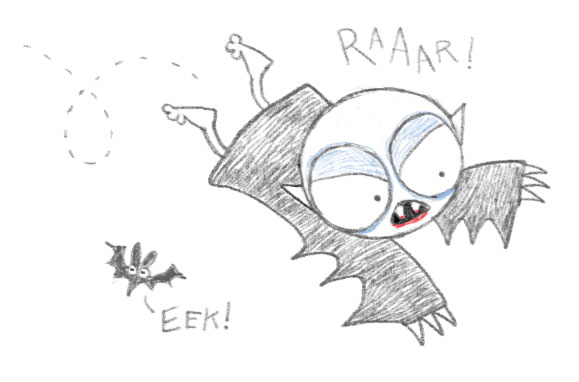 Lots of things! I’ve been doing some work with Sarah McIntyre on a mystery project. The mystery has, for a while, been whether it would ever see the light of day at all! But happily the end is (almost) in sight. This is an image that may (or may not) be in the final thing. Dissemblers assemble! 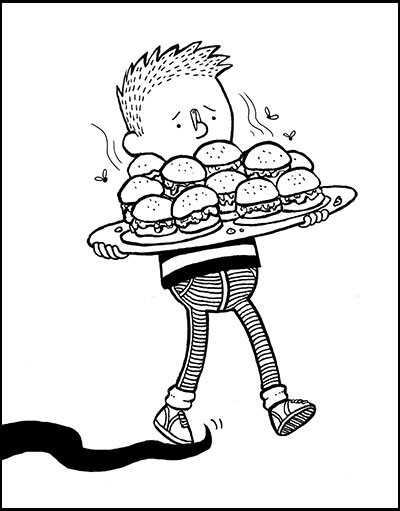 I’ve also been busy on the illustrations for MONSTER & CHIPS 2: Night of the Living Bread. The deadlines are TIGHT but I think I’m on course.
I gave a short talk last night to some of the lovely people from the children’s book division at the HQ of my publisher, HarperCollins. They were very polite and attentive as I babbled on about comics a lot. There were chips and wine afterwards too – most civilised!
In other Monster & Chips news, there’s an interview with me in the current issue of TBK magazine and here’s a quick reminder that the competition to win an iPad is still open at the official Monster & Chips website. Create your own recipe and you could win!

Also not in my comfort zone: I was very honoured to be asked to contribute to the new Tiny Pencil artzine, edited by Katriona Chapman and Amber Hsu. It celebrates illustrated work in pencil or charcoal, untouched by ink or any digital shenanigans. Yikes! All my safety nets gone! The pic is a detail of my contribution. Yes, more monsters!

Finally, I was very fortunate to visit the BT Tower this month on one of its rare openings to the public. It was open in aid of a charity event which happened to coincide with our wedding anniversary so we made a day of it. There was a glass of champagne waiting at the top too, appropriately enough, and the organisers had switched on the revolving floor which was a novel, if slightly disconcerting, experience. The weather had been kind so the views across London were spectacular.

I much preferred it to the Shard which we’d visited just before it opened in February as part of a free preview for local residents.

I think the Shard is just a little too high to appreciate the mostly low rise city below it, but from the shorter BT Tower you can see the detail better. I was pleasantly surprised by just how green London is too. Lots of little parks and tree-filled squares everywhere. The city definitely looked at its best.